Ukraine used the Chernobyl nuclear power plant zone for work on the manufacture of a "dirty bomb" and the separation of plutonium, a representative of one of the competent departments of Russia said. 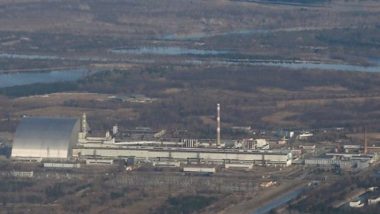 New Delhi, March 6: Ukraine used the Chernobyl nuclear power plant zone for work on the manufacture of a "dirty bomb" and the separation of plutonium, a representative of one of the competent departments of Russia said.

"It is worth noting separately the use of the Chernobyl nuclear power plant zone as a site for the development of nuclear weapons," the source told RIA Novosti.

According to the source, the increased radiation background natural for the Chernobyl zone hid the conduct of such work, RT reported. Ukraine Stored Documents on Nuclear Weapons in Zaporizhzhia, Says Report.

The use of a "dirty" bomb involves the explosion of a munition with conventional explosives containing radioactive substances.

For example, when an ammunition is detonated, the container with isotopes is destroyed, and the shock wave carries radioactive substances. The agency notes that such weapons have never been used in real conditions.

At the same time, employees of the Odessa National Polytechnic University, who have experience in the field of mathematical modeling of the kinetics of thermonuclear reactions, were involved in the development of certain problems in this area, the interlocutor noted.

Simultaneously with the work on the creation of a nuclear explosive device, Kiev was actively engaged in potential means of delivery of nuclear weapons, a representative of one of the competent departments of Russia told RIA Novosti.

"In parallel, work was underway in the country to modernize existing and create new missile weapons that can be used as a means of delivering nuclear weapons," the representative said.

The clashes at the Zaporizhzhia nuclear power plant could have occurred due to the storage of documentation there, which relates to promising work on the creation of nuclear weapons by Ukraine, a representative of one of the competent departments of Russia told RIA Novosti.

According to the interlocutor, Ukraine partially destroyed, partially evacuated the main body of documents on this topic from Kiev and Kharkiv to Lviv.

"There was also certain documentation at the Zaporizhzhia NPP. The clashes with Ukrainian sabotage and reconnaissance groups in the administrative premises adjacent to the nuclear power plant were, apparently, connected precisely with this," the representative said, RT reported.

According to him, the documentation may be in the National University "Lviv Polytechnic".

(The above story first appeared on LatestLY on Mar 06, 2022 07:34 PM IST. For more news and updates on politics, world, sports, entertainment and lifestyle, log on to our website latestly.com).