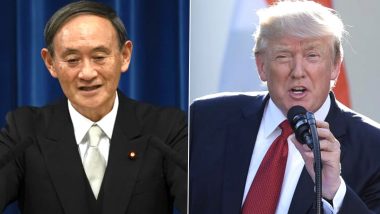 Tokyo, Sep 21: Japan's new Prime Minister Yoshihide Suga held his first phone talks with US President Donald Trump since he took office last week, during which the two leaders agreed to further strengthen the security alliance between the two countries.

During the phone call on Sunday night that lasted about 20 minutes, Suga and Trump also discussed the situation in North Korea as well as the response to the coronavirus pandemic, reports Xinhua news agency. Who is Yoshihide Suga? Five Key Things to Know About Japan's New Prime Minister.

Addressing the media after the talks, Suga, who was elected as Japan's first new leader in nearly eight years in an extraordinary parliamentary session on September 16, said he told the US President that the alliance is the "cornerstone of peace and stability in the region", The Japan Times reported.

Trump was quoted by Suga as saying the alliance should be strengthened even further and that Suga is welcome to call him "24 hours a day".

Earlier in the day, Suga had a phone conversation with his Australian counterpart Scott Morrison, the first head of government he spoke to since his inauguration.

After talking with Trump, Suga said he was willing to hold telephone talks with other world leaders, without touching on details.

According to the Prime Minister's office, Suga's National Security Adviser Shigeru Kitamura will visit Washington next week to meet his counterpart Robert O'Brien.

Suga replaced Shinzo Abe to become the 99th Japanese Prime Minister and also the leader of the ruling Liberal Democratic Party after the latter's abrupt announcement late last month that he was stepping down due to a recurrent health issue.

At the age of 71, Suga will be the oldest Prime Minister to take office since Kiichi Miyazawa in 1991.

His premiership will last through the remainder of Abe's term as LDP leader until September 2021.

In the run-up to his inauguration, Suga said he would continue to promote Abe's policies, including his "Abenomics" of aggressive monetary easing, fiscal stimulus and structural reforms, to breathe life back into the recession-hit Japanese economy.

(The above story first appeared on LatestLY on Sep 21, 2020 11:52 AM IST. For more news and updates on politics, world, sports, entertainment and lifestyle, log on to our website latestly.com).