An eight-year old boy stumped police here with a strange complaint - seeking 'arrest' of five girls, including his elder sister, for bullying and not playing with him during the COVID-19 lockdown. 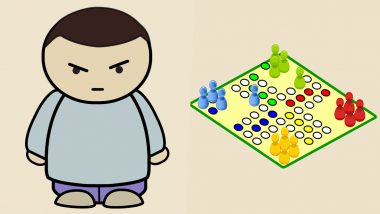 Kozhikode, May 13: An eight-year-old boy stumped police here with a strange complaint - seeking 'arrest' of five girls, including his elder sister, for bullying and not playing with him during the COVID-19 lockdown. "They are making fun of me because I am a boy. They are not allowing me to play ludo, shuttle, Police and Thief game with them", Umar Nidar told the police on Monday. Mumbai Police Shares 'Ludo Game' Meme Giving Importance About Staying at Home During COVID-19 Lockdown, View Post.

The innocent boy approached police after his father jocularly asked him to lodge a police complaint when the former told him about the behaviour of his sister and others, who are related to the family and neighbours, police said. The boy was annoyed at not being able to join his friends and play due to the lockdown. Civil Police officers U P Umesh and KT Niraz of Kasba Police station visited his house and resolved the "issue" with advice to the girls to take him along. Ludo Fight Takes a Hilarious Turn As Wife Accuses Husband of Being ‘Dishonest’ While Playing the Board Game, Both Land in Police Station.

The complaint, written by the third standard student in English, was handed over to the two police officials when they had visited the boy's neighbourhood to inquire into another complaint on May 10. "I have a complaint", Nidar had said as he handed over his plaint to Umesh and Niraz. As it was already late evening then, the policemen assured the boy they would visit his house the next day to find a solution to his problem, Niraz said. They kept their words and promptly turned up at his house on Monday. "I told them (the girls) several times to take me along in their games, but they refused", the boy said.

After listening to his woes, police called the other children and advised them to include Nidar also while playing, Niraz said. The boy's sister said they never thought he would hand over a complaint to police.