According to the online ticket booking platform BookMyShow, Sooryavanshi crossed 1.5 million tickets on its platform, while Annaatthe surpassed 1.3 million and Eternals crossed half a million mark. 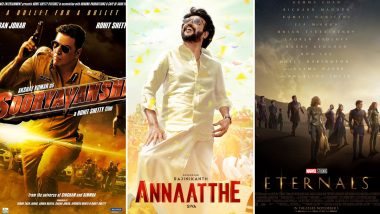 The box office performance of the Akshay Kumar-starrer "Sooryavanshi", Rajinikanth-headlined "Annaatthe" and multi-starrer Hollywood release "Eternals" has infused a much needed festive spirit to the cinema business, which was hit badly due to the Covid-19 pandemic, say exhibitors and distributors. The three mega films released during the Diwali weekend to mixed critical reviews but were lapped up by the masses. Sooryavanshi Box Office Collection Day 3: Akshay Kumar, Katrina Kaif’s Actioner Mints Rs 77.08 Crore in Opening Weekend.

While "Sooryavanshi", directed by Rohit Shetty, released on more than 3,000 screens across India and clocked Rs 77 crore in its opening weekend, the tentpole superhero film "Eternals" from the Marvel Cinematic Universe stable also put up a total of Rs 19.15 crore in the country. "Sooryavanshi" producers waited for nearly 18 months for the film's release, which was originally slated to arrive in theatres in March last year but the pandemic led to an unprecedented shutdown of cinema halls everywhere. Sooryavanshi Ending Explained: 5 Questions Raised in Akshay Kumar’s Hit Film That Set Up the Plot of Ajay Devgn’s Upcoming Singham 3! (SPOILER ALERT).

Kamal Gianchandani, CEO of PVR Pictures, said with "Sooryavanshi", "Annaatthe" and "Eternals", the Diwali the sector was waiting for had finally arrived. "The business of all three films has exceeded our expectations. The numbers are phenomenal. These films were critical and their current box office figures have put all anxieties and apprehensions to rest. "While 'Annaatthe' saw an unprecedented advance booking, 'Sooryavanshi' took off and now there's no turning back. 'Eternals' too is holding well because Marvel has a hardcore fanbase in the country," he told PTI.

According to trade observer Himesh Mankad, the Siva-directed "Annaatthe" made approximately Rs 73 crore in its first weekend countrywide, taking the cumulative figures of the three films to approximately Rs 170 crore. He said the figures are a reason to celebrate as the movies have managed to do an impressive business despite Maharashtra—a core territory for Hindi films—allowing cinema halls to operate only at 50 per cent occupancy. "It's a huge number. If not for the pandemic, this would have been somewhere around Rs 200 crore. So the market is performing at 75 per cent of its potential which is something to celebrate. These are extremely encouraging numbers and will set the ball rolling for future films," Mankad told PTI.

Raj Bansal, senior distributor and exhibitor, said he has been running packed shows of "Sooryavanshi" at his property Entertainment Paradise—a three-screen multiplex—in Jaipur. "The business is like nothing ever even happened.'Sooryavanshi' has revived the industry. It was the right film to kickstart the revival. The opening has truly surprised us too because a key territory like Maharashtra is still running on limitations. "So this was not just any other weekend, it was a much-needed breather for the industry," Bansal added. Exhibitor Sunny Chandaramani, who has nearly 20 single screen cinemas in Pune, told PTI that the box office collections of these films prove that tentpole films are here to stay.

"Looking at the collection of 'Sooryavanshi', it seems that the good-old-days are back. It shows that big films are able to draw audiences to theatres and also the fact that people were waiting to go to cinema halls," Chandaramani added. When the nationwide lockdown was announced last year, many filmmakers headed to the OTT (over-the-top) platform to showcase their films.Over the months, the debate around the OTT versus cinema halls intensified, with many fearing that the pandemic will make the audience comfortable watching films from their homes and thus putting an end to the community viewing experience of a cinema hall.

But Bihar-based exhibitor Vishek Chauhan said the recent releases have muted the debate. His Roopbani Cinema in Purnea, Bihar, ran 15 packed shows of "Sooryavanshi" throughout the weekend. "For all those who felt theatres are dead, it took a 'Sooryavanshi' to show them the mirror. The business of the film not only proves that the audience is still interested in stepping out and watching films but also that cinema halls are here to stay. "Otherwise these numbers would've been impossible. The critics may not have liked the film, but the audience verdict is out. And box office is an indicator of that," he added.

Manoj Desai, executive director of G7 Multiplex and Mumbai's iconic Maratha Mandir, said it's clear that film business is back to pre-COVID times with the overwhelming response at the box office. Rajender Singh Jyala, Chief Programming Officer, INOX Leisure Ltd said the films' collections is a sign that the audiences are coming back to cinemas with a "vengeance". "With a great content pipeline in the months to come, I believe the Indian cinema industry will recover faster. Furthermore, since people are vaccinated to a large extent, there is less fear psychosis amongst them. So, I believe all movies releasing in this festive season will act as a powerful magnet to tempt the audience to come back to the theatres," Rajender told PTI. According to the online ticket booking platform BookMyShow, "Sooryavanshi" crossed 1.5 million tickets on its platform, while "Annaatthe" surpassed 1.3 million and "Eternals" crossed half a million mark.