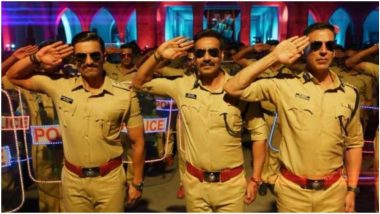 Having seen Sooryavanshi, we do have these five questions that we expect Singham 3 to answer. Needless to say, MAJOR SPOILERS AHEAD!

Will Singham 3 Be Set in Pakistan?

In the finale of Sooryavanshi, Bajirao Singham challenges Hafeez on phone that he will take on the mastermind by coming to where he is hiding - in Pakistan. So most probably, Singham will move from being a normal police officer to getting into ATS or maybe even RAW so that he could negate Hafeez's terror there. Can we see him pull off a Tara Singh in the neighbouring country?

Will Omar Hafeez's Grandson Be Raised a Villain?

By the end of Sooryavanshi, Omar Hafeez has already lost his three sons in the war against terrorism. But there is his teenage grandson, who is touted to go to England for further studies. Will he return for Singham 3 to carry on his grandfather's terrifying legacy? Or will Rohit Shetty save him for the movie, that is kind of The Avengers in this copverse?

Will Singham 3 Bring Back Sooryavanshi and Simmba?

Speaking of Coperverse's Avengers style movie, is there any need for that, since it is a taken that Akshay Kumar and Ranveer Singh are most likely going to appear in it. Veer Sooryavanshi is already heading the ATS unit, so it is silly that he will sit out of the action here, and it would be a crime not to include Ranveer's scene-stealing Simmba. So we are hoping that Singham 3 would provide reunion for the trio, as their entertaining tok-jhok (even at times, forced) was easily the best part about Sooryavanshi. Simmba: Akshay Kumar’s Sooryavanshi, Ajay Devgn’s Golmaal 5 – 5 Upcoming Movies Teased by Rohit Shetty in Ranveer Singh’s Film.

Which Continuity Will Singham 3 Have?

While Bollywood is going gaga over Rohit Shetty's first-of-a-kind shared universe in the industry, let's also not forget the fact that, unlike MCU, this wasn't always the plan. The idea might have germinated when Rohit was making Simmba, for the movies that came before - Singham and Singham Returns - showed no respect for continuity at all. Both the films have the same protagonist, but that's just about it. From the female lead to its hero background, everything was different about these two films (like the Munna Bhai franchise). So we can't help but ask if Singham 3 would follow the much better Singham or its vacuous sequel in terms of continuity? Or will it ignore both the movies and bring in a new continuity?

Will A New Hero Be Introduced in Singham 3?

There were quite a noise that Sooryavanshi might have a fourth cop hero character, which could possibly be Salman Khan's Chulbul Pandey from Dabangg series. A rumour very much encouraged by Rohit Shetty and Salman Khan themselves. There was also this rumoured series that Shetty is overlooking, which will have Sidharth Malhotra play a cop, and therefore fans expected him to make a cameo in Sooryavanshi. Shetty also mentioned a female cop-spinoff couple of years back when Sooryavanshi's initial promotions were on. The movie, however, didn't have any new cameos, so will Singham 3 have the task of expanding the copverse?

(The above story first appeared on LatestLY on Nov 08, 2021 04:41 PM IST. For more news and updates on politics, world, sports, entertainment and lifestyle, log on to our website latestly.com).