The National Payments Council of India (NPCI) is in talks with the Reserve Bank of India (RBI) to decide the fate of its proposed December 31, 2022 deadline for capping UPI market cap of each third-party app provider to 30 per cent, according to multiple reports. 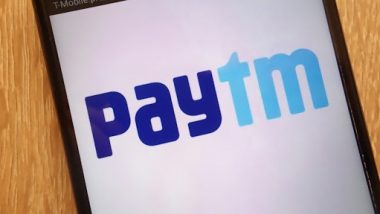 New Delhi], November 23: The National Payments Council of India (NPCI) is in talks with the Reserve Bank of India (RBI) to decide the fate of its proposed December 31, 2022 deadline for capping UPI market cap of each third-party app provider to 30 per cent, according to multiple reports. While the implementation of the proposed move would significantly reduce the market cap of some online third-party payment apps, it would have no impact on leading fintech company Paytm.

This is because Paytm UPI is owned by Paytm Payments Bank Limited, which is NPCI-certified payment service provider and issuer bank for UPI transactions, and not a third-party. Paytm Down: Users Complain of Payment Issues; Paytm Money Comes Up With Statement (Check Tweets).

Paytm Payments Bank being an issuer and payment service provider bank in itself along with being an acquirer of UPI transactions on its own platform, makes it the source and destination for all of its transactions. So, it effectively serves the customer end-to-end in a transaction. Recently, Paytm Payments Bank said that it supports market capping in UPI. Vijay Shekhar Sharma, CEO of Paytm, Arrested and Released on Bail in February For Ramming Into DCP's Car.

"We believe the proposed implementation of UPI market capping will be hugely beneficial for the UPI ecosystem. This move by the NPCI will bolster the growth of digital payments and democratize it for the citizens, ending market concentration risk. With this, UPI will become even more accessible and enable further digital adoption," Paytm Payments Bank spokesperson said in a statement.

If the proposed UPI market cap comes into effect from December 31, 2022, it will be hugely beneficial for Paytm, which is currently the third based on UPI market cap. While UPI transactions bear no charges for the end user, it can help Paytm ramp up its customer acquisition, which is a crucial aspect of its business model and monetization.

"Early and adopters and late majority users of any app are the most important user base as they eventually help in monetisation. UPI third-party app providers are almost entering the fag ends of laggard users. Assuming the latest phase hitting in another year, changes suggested by NPCI may not be relevant. PayTM will sail through this change as their TPAP is exempted as it is being managed by Paytm Payments Bank," said Pooja Sondhi, Director and COO at supply chain finance solutions provider Livfin.

Paytm Payments Bank continues to maintain its position as the top UPI beneficiary bank in the country, with 1,614.03 million transactions recorded in October 2022. It is also among the top 10 leading remitter banks in the country, as per latest UPI statistics on NPCI's website.

At present, the UPI market is dominated by players like Google Pay and PhonePe, with a combined market share exceeding 80 per cent. To avoid such concentration in the UPI market, the NPCI in 2020 came up with a directive to cap the share of transactions of at 30 per cent of the total volume of UPI transactions.

"Capping the market share of individual UPI players at 30 per cent might shake the duopoly of Google Pay and PhonePe and may lead the listed fintech company, Paytm, to gain market share from its peers owing to the volume cap norm," said Mohit Nigam, Head - PMS of Hem Securities.

"The UPI Ecosystem statistics show that other players such as BHIM, Cred, Amazon Pay have a very meagre market share and hence Paytm's network effect might play out for it to capture some extra share of the pie from the top two players," Nigam added.

NPCI had given existing third-party app provider that exceed the cap two years to comply with the directive. However, the big among them have failed to reduce their individual UPI market share and continue to exceed the 30 per cent limit by a huge margin.

According to multiple reports, the NPCI is currently evaluating all the possibilities and no final decision has been taken to extend the deadline any further.