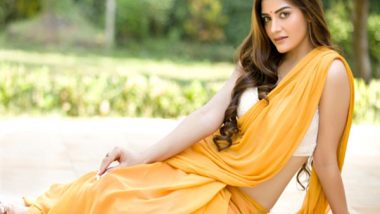 Kajal Chouhan to make her Kollywood debut with Shooting Star

Titled 'Shooting Star' the movie pooja was held at Srinidhi Arts Office in Chennai recently. Speaking about the movie, the filmmaker said, "The story is about how an innocent guy is taken for a ride in this vulturous world.

The film will be a comedy riot, but in the end, it will leave the audience teary-eyed."

With a multi-star cast, this fun-masala film is a perfect treat for the cine goer.

The shooting commences soon in Mumbai and is planned at some of the picturesque locations in India and abroad.

Kajal, who is making her Kollywood debut, is extremely happy about this project and is excited to kick start her dream Tamil project.

Known for her impeccable acting and envious body, Kajal is confident in winning the hearts of the audience with her acting and dance moves.

Earlier, Kajal appeared in some music videos which garnered millions of views on YouTube. And her acting journey has now started for her, and she is slowly paving her way in showbiz and says is waiting for the right scripts and opportunities that showcase her talent to the fullest.

She aspires for an amazing breakthrough in the industry, and we are excited to see her future endeavours because this industry needs more people like her.

This story is provided by GPRC. ANI will not be responsible in any way for the content of this article. (ANI/GPRC)