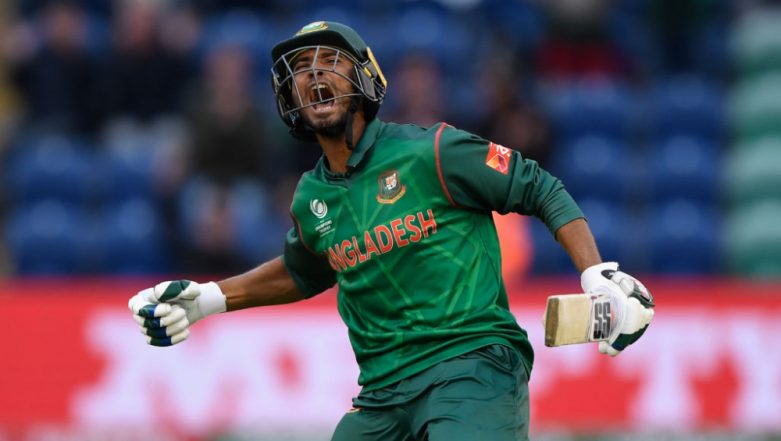 Dubai, June 26: Bangladesh all-rounder Mahmudullah will play against India if he is able to recover from injury, informed skipper Mashrfe Mortaza."I am sure he will play against India even if there is the slightest chance. He can make up for the physical deficiency with mental strength," International Cricket Council (ICC) quoted Mashrafe Mortaza as saying. ICC Cricket World Cup 2019 – Points Table.

Bangladesh have kept their hopes alive to make it to the semi-finals as they won their last match against Afghanistan. They have seven points in the seven matches so far. Bangladesh have won three matches and their one game was called off due to rain.Mahmudullah suffered a calf injury while batting against Afghanistan. The 33-year-old was taken to hospital for scans which indicated that he had sustained a grade one tear.

"Mahmudullah has sustained a low-grade calf injury. We will monitor his progress over the next few days with regards to his availability for the next World Cup match," Thihan Chandramohan (Bangladesh physio) said on Tuesday after the Bangladesh-Afghanistan match. Bangladesh, Team Manager, Khaled Mahmud stated Mahmudullah is a vital player of the team and there will be 50-50 chance of him playing against India."It's a grade one tear. But it is curable. Our next match is on Tuesday.  ICC Cricket World Cup 2019 Schedule in IST, Free PDF Download: Full Timetable of CWC19 Fixtures With Match Timings and Venue Details.

We have seven days in our hand. It's a 50-50 chance at the moment. We cannot say he will play, or he is ruled out from the next match. We have to assess the situation in the next few days. Mahmudullah is a very important player for our team. I believe he will be okay before the game," Mahmud said.

Mahmudullah is an experienced middle-order batsman in Bangladesh's team and was the star performer in the 2015 World Cup.Bangladesh will play against India on July 2 at Edgbaston in Birmingham.