Comedian and talk show host Ellen DeGeneres shared a preview clip from her interview with the 39-year-old pop star in which he offered the first-ever confirmation of the little one who arrived in 2020. 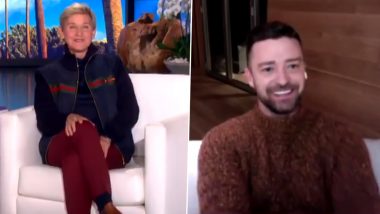 American singer-songwriter Justin Timberlake on Sunday (local time) opened up about welcoming a second child with wife Jessica Biel. According to E!News, comedian and talk show host Ellen DeGeneres shared a preview clip from her interview with the 39-year-old pop star in which he offered the first-ever confirmation of the little one who arrived in 2020. The couple, who married in 2012 and share 5-year-old son Silas, had not revealed they were expecting. Palmer Trailer: Justin Timberlake’s Drama Dealing With Gender Identity and Parenthood Looks Poignant (Watch Video)

"His name is Phineas, and he's awesome and so cute, and nobody's sleeping," Justin told Ellen. "But we're thrilled. We're thrilled and couldn't be happier. Very grateful." When Ellen asked how different it is to be parenting two children instead of just one, he quipped, "We don't see each other anymore." He then added, "It's a lot of fun, but I guess the saying goes, you go from a zone defence to a man-to-man really quickly. Sort of like, 'You go get that one, I'll get this one!'" Justin Timberlake and Jessica Biel ‘Secretly’ Welcome Second Child! Couple Is Now Proud Parents To A Baby Boy

.@JTimberlake told me the name of his new baby! Don’t miss the full interview on my show tomorrow. pic.twitter.com/grBQ9sls0S

Timberlake said that Silas is thus far enjoying his new role as a big brother.

The 'Cry Me A River' performer continued to say, "Silas is super excited. Right now, he's very much liking it. Phin can't walk yet or chase him down, so I don't know. We'll see what happens." In July, E! News reported that the pair had welcomed their second baby, citing reports. Justin and Jessica have not yet publicly shared a photo of Phineas.