Actor Julia Fox may soon be cast for an important role in Madonna's forthcoming biopic. Entertainment Weekly has learned the 31-year-old performer is being considered to play the role of actor Debi Mazar, the singer's longtime friend. 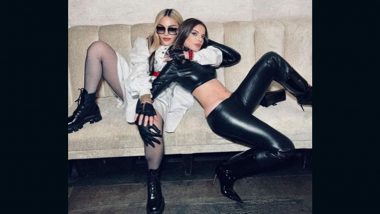 Actor Julia Fox may soon be cast for an important role in Madonna's forthcoming biopic. After Madonna shared an Instagram post earlier this week indicating that she "went to dinner with Julia (Fox) to talk about my movie," Entertainment Weekly has learned the 31-year-old performer is being considered to play the role of actor Debi Mazar, the singer's longtime friend. Human: Shefali Shah Opens Up About Her Role as Doctor Gauri Nath in Disney+ Hotstar Series.

Kanye West, Antonio Brown, and Floyd Mayweather were also pictured in the photos Madonna shared of her meeting with Fox. Mazar, best known for her roles in the film 'Goodfellas' and the series 'Younger' and 'Entourage', has a decades-long relationship with Madonna that began when they met in an elevator while Mazar worked as an operator at New York City's Danceteria nightclub in the 1980s. Mazar went on to star in several of Madonna's music videos, including 'True Blue' and 'Music'. OTT Releases of the Week: How I Met Your Father on Disney+ Hotstar, Unpaused - Naya Safar on Amazon Prime Video, 36 Farmhouse on ZEE5 and More.

"We got on the dance floor and tore it up. We exchanged phone numbers and that was it. We became friends," Mazar previously told EW of meeting Madonna for the first time. Madonna has been working on bringing her life story to the big screen for several years, with Universal Pictures and Amy Pascal producing the title with Madonna in the director's chair.

She initially began writing the script with Oscar-winning 'Juno' scribe Diablo Cody, whom EW previously confirmed finished a full draft of the script before moving on to other projects. Erin Wilson reportedly stepped in after Cody left.

Most of the film, Madonna has said in the past, will follow her "struggle as an artist trying to survive in a man's world as a woman, and really just the journey," which she described as a "happy, sad, mad, crazy, good, bad, and ugly" tale of the making of an icon.