OTT Releases of the Week: How I Met Your Father on Disney+ Hotstar, Unpaused – Naya Safar on Amazon Prime Video, 36 Farmhouse on ZEE5 and More

We search for intriguing content on the OTT platforms every week, so that audience can relax and binge-watch what they prefer and want. With several theatrical releases being postponed, let's quickly take a complete look at the series and movies releasing on the OTT platforms this week. 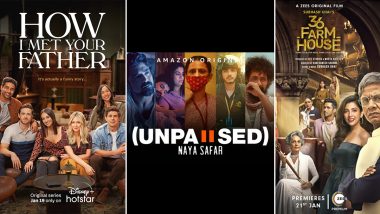 We are moving on the third week of January 2022 and we can see that several movie releases getting postponed due to the surge in COVID-19 cases. So, viewers are eagerly looking forward to OTT platforms. With that, there are several interesting series and movies releasing on OTT platforms like Disney+ Hotstar, Amazon Prime Video, Netflix and ZEE5. Talking about the biggest release of the week it would be Unpaused: Naya Safar, which will drop on Amazon Prime Video on January 21. The anthology series consists of five short stories which includes Teen Tigada, The Couple, Gond Ke Laddu, War Room and Vaikunth. The story is about hope, love, connections and second chances. Unpaused Trailer: Naya Safar’ Anthology Starring Saqib Saleem, Shreya Dhanwanthary And Others, Gives A Glimpse Of The Challenges Faced By All Due To The Pandemic (Watch Video).

Another big release of the week would be How I Met Your Father, which is all set to stream on Disney+ Hotstar from January 19. This is a standalone sequel to American sitcom How I Met Your Mother. The series stars Hilary Duff, Kim Cattrall, Chris Lowell, Francia Raisa and Tom Ainsley, among others. Another interesting release of the week would be 36 Farmhouse, which will release on ZEE5 on January 21. The comedy movie revolves around a father-son duo who accidentally enters a farmhouse with secret motives. Helmed by Ram Ramesh Sharma, the flick stars Vijay Raaz, Sanjay Mishra, Amol Parashar and Flora Saini in key roles. 36 Farmhouse Trailer: Vijay Raaz, Sanjay Mishra, Amol Parashar’s ZEE5 Film Looks like an Entertaining Comedy (Watch Video).

(The above story first appeared on LatestLY on Jan 16, 2022 06:46 PM IST. For more news and updates on politics, world, sports, entertainment and lifestyle, log on to our website latestly.com).