Aarya Season 2: Salman Khan Is in Awe of Sushmita Sen's Look as He Shares Still of Her Disney+ Hotstar Show's Hoarding

Sushmita Sen, who has been basking in the success of Aarya 2, received huge praises from her friend and actor Salman Khan. 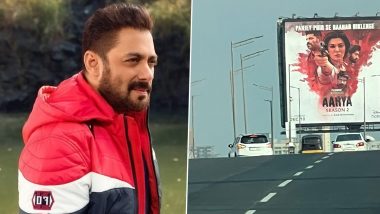 Sushmita Sen, who has been basking in the success of Aarya 2, received huge praises from her friend and actor Salman Khan. Taking to Instagram, Salman posted a photo of Aarya 2's hoarding in Mumbai and complimented Sushmita. After Succession Season 3 Finale, Fans Share Funny Memes on the HBO's Hit Show (View Tweets).

"Arre wah Sush how nice u looking ya. Totally killing it. So happy for u . @sushmitasen47," Salman wrote. After seeing Salman's post, Sushmita thanked him for "all the love & generosity."  KBC 13: Harbhajan Singh, Irfan Pathan to Appear on the Season Finale of Amitabh Bachchan's Quiz Show.

"You are a Jaan @beingsalmankhan . Thank you soooooo much for all the love & generosity! #cherished," she replied. Salman and Sushmita have worked together in several films such as 'Biwi No.1' and 'Maine Pyaar Kyun Kiya'.