Shah Rukh Khan has recently gone viral online as he was seen flaunting a classic man bun. Netizens are over the moon at how good the actor looks in a simple hairstyle. 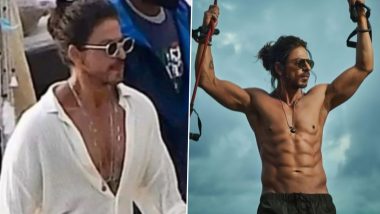 One picture of Shah Rukh Khan is enough to make his fans trend him on social media. On Thursday, a new image of SRK from the sets of Pathaan surfaced online. In the viral image, SRK is seen sporting a white shirt. He looks uber cool in a bun and sunnies. Reacting to SRK's look, a social media user commented, "Oh my God. Can't take my eyes off him." "SRK is the best," another one wrote. "SRK is back and how," a netizen commented. 30 Years Of Shah Rukh Khan: Superstar Completes Three Decades in Bollywood, Netizens React.

On June 25, 2022, Shah Rukh completed 30 years in the film industry. Marking the special occasion, he did an Instagram live session, in which he revealed several details about his upcoming films.

He hinted that Salman Khan might be a part of a song in Pathaan, which also stars Deepika Padukone, John Abraham and Ashutosh Rana among others. "With Salman Khan, there is no working experience. There is only love experience, happy experiences, friendly experiences and brotherly experiences. So, it is amazing whenever I get to work with him," Shah Rukh Khan said when a fan asked him his experience of working with the actor.

He continued, "We haven't done a full-fledged film together apart from Karan Arjun, which also was not full-fledged as we were not together in it for too long. So, we get to work four-five days in a year sometimes. Last two years have been fantastic as I got to be in one of his films. I had a couple of days role with Kabir Khan. And he came in Zero and did a song with me. Now, in Pathaan. I don't know if this is a secret but inshallah, I will try to in Tiger 3 also. So, it is great fun working with him." Shah Rukh is also coming up with Dunki, which is helmed by Rajkumar Hirani and Atlee's directorial Jawan. Shah Rukh Khan Looks Charismatic as He Poses with a Star-Struck Cameraman at Studio.