On Instagram, the 'Dabangg' star shared a glamorous picture of herself where she is seen donning a beautiful white truffle dress. 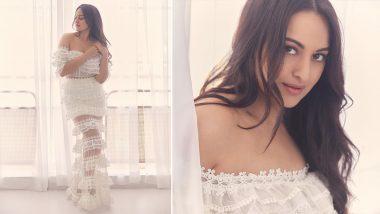 Bollywood actor Sonakshi Sinha on Tuesday treated fans and followers on social media to an alluring picture of herself in a white outfit with open wavy hair. On Instagram, the 'Dabangg' star shared a glamorous picture of herself where she is seen donning a beautiful white truffle dress. Sonakshi Sinha Becomes Licensed Scuba Diver, Scores 100% in the Open Water Diver Course Test (View Post)

With a no-makeup look and open wavy hair, the star looks pleasing to the eyes. She also added a little caption to the picture which read, "The future looks bright!" The scintillating picture of the 'Son of Sardar' actor garnered more than 70,000 likes within a few minutes of posting. Sonakshi Sinha Shares Mesmerising Sunset Picture from Maldives Vacation

On the work front, the 'Lootera' actor will also be seen playing a role of the brave social worker Sunderben Jetha Madharparya, in the upcoming Indian Hindi-language war drama action film 'Bhuj: The pride of India', directed, co-produced and written by Abhishek Dudhaiya.