Get latest articles and stories on India at LatestLY. Chief Justice of India NV Ramana on Tuesday said that 13 judges of the Supreme Court and 400 people in the registry were infected with COVID-19 during the third surge in the coronavirus cases. 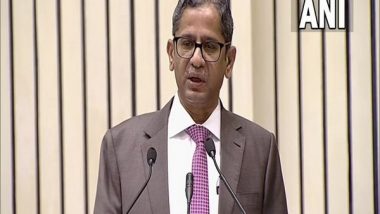 New Delhi [India], January 25 (ANI): Chief Justice of India NV Ramana on Tuesday said that 13 judges of the Supreme Court and 400 people in the registry were infected with COVID-19 during the third surge in the coronavirus cases.

CJI Ramana shared these facts when one of the lawyers complained that his matter was not urgently listed by the registry.

CJI Ramana informed the lawyer that 13 judges of the top court were infected with COVID-19 and the number of officers in the registry were also positive.

CJI said that they are working even though their bodies were not cooperating.

Also Read | Uttarakhand Assembly Elections 2022: A Look Back at The Polling, Alliances And Results of 2017 Election Ahead of State Vidhan Sabha Polls.

"If you don't know the problems what can we do," CJI said stating that 400 people in the registry got COVID-19 and 13 judges were tested positive with the virus. He also said that despite our bodies are not cooperating we are sitting and doing cases.

The Supreme Court has a total working strength of 32 judges, including the Chief Justice of India NV Ramana. Nearly 3,000 staff members are currently are working in SC.

Suspending the physical and hybrid option of the hearing, the apex court decided to shift to complete virtual hearing for two weeks.

A statement issued by the top court, which had started physical hearings from October 7, said the arrangement of the virtual proceedings shall continue for two weeks. (ANI)