Deputy Chief Minister and Aam Admi Party leader Manish Sisodia on Friday came down heavily on the Bharatiya Janata Party (BJP) and alleged that the BJP tried to stop 'Desh ke Mentor' campaign by asking a Chattisgarh BJP party worker to file a complaint with National Commission for the Protection of Child Rights (NCPCR) that the programme is not safe for children. 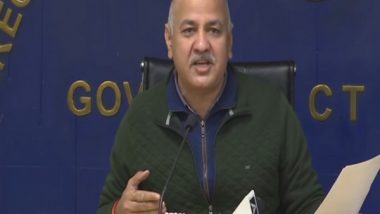 New Delhi, January 14: Deputy Chief Minister and Aam Admi Party leader Manish Sisodia on Friday came down heavily on the Bharatiya Janata Party (BJP) and alleged that the BJP tried to stop 'Desh ke Mentor' campaign by asking a Chattisgarh BJP party worker to file a complaint with National Commission for the Protection of Child Rights (NCPCR) that the programme is not safe for children.

The comments of the Deputy Chief Minister came after the NCPCR on Friday sought the suspension of the Delhi government's 'Desh ke Mentor' programme until safety "loopholes" be "overhauled".

"Delhi government started a mentor programme. BJP got nervous about this programme and tried to stop it. BJP has given an order to close this programme. BJP has made their Chattisgarh worker complain against this 'Desh ke Mentor' programme in NCPCR that the children could be harmed and their protection could be compromised under the programme," Sisodia told the media persons at a press conference.

"BJP is nervous of the fact that 1,76,000 children are getting help in getting a good career and realizing their dream. They are nervous that if children get a good education then how will they be able to mislead them and entangle them in the politics of caste and religion. They do not want the children to come out of darkness," he added.

"BJP is nervous that If the youth start mentoring the children then how will the youth be able to believe the information provided by the WhatsApp University. How will the youth promote their propaganda on Youtube and Facebook," he added.

He also said that under this programme, the people who are well-educated would be mentoring and guiding the children who study in government schools and children of uneducated parents.

"The mentors will guide them on which college to choose, fees, scholarship, etc," he stated while talking about the features of the programme.

"Under the programme, through phone calls, you can help such children studying in the government schools. A total of 44,000 youth came forward. A total of 500 are out of IIT while 500 are graduated from IIM, 15,600 people are getting education till PhD, 7,500 are employed. We have provided 1,76,000 children with mentors. These are those students whose parents are not educated and don't have knowledge of new-age careers. We are able to provide 44,000 mentors so far," he further stated.

We have rejected over 700 people who were not able to clear the psychometric assessments," he stated.

"On the other hand, BJP has accused us that we have not done police verification of mentees. Through phone calls, they could be the possibility of child trafficking and cybercrimes. If the IIT-IIM graduate handhold the children then they are thinking that it will lead to child trafficking," he stated.

"I want to say that you are not able to do anything for the education of the nation. We know that BJP has by birth enmity with education. At least let the people who want to do something about education then please let us do that. They should feel ashamed of themselves," he concluded.