Farmers owing allegiance to Bharatiya Kisan Union (Ekta- Ugrahan), one of the largest farm bodies in the state, who entered Haryana from Khanauri border, were about 120 km away from the national capital. 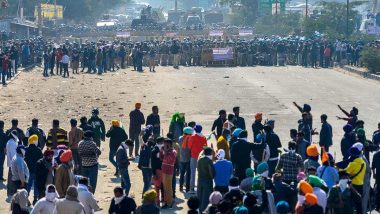 Chandigarh, November 27: Farmer leaders from Punjab on Friday said they would hold a meeting on Saturday to decide the next course of action even as they were in favour of going to Burari to hold an agitation over Centre's farm bills.

"Several farmer leaders are still on their way to Delhi. We will hold a meeting tomorrow and then take our next decision," said Bharatiya Kisan Union (Dakanuda) president Buta Singh Burjgill over the phone. Another farmer leader, Krantikari Kisan union president Darshan Pal, said they were in the favour of going to Burari as they had given a call for 'Delhi Chalo' march. The programme was aimed at going to Delhi and putting pressure on the Centre over the three farm laws, he further said.

Pal said the Burari ground could accommodate a large number of protesters who had come from Punjab, Haryana and other places. The Delhi Police on Friday allowed protestors to hold their protest at Burari ground. Meanwhile, several farmers have gathered at Delhi's border with Haryana in Sonipat district and they will halt for the night there. Farmers' Protest Allowed at Delhi's Nirankari Ground, Traffic Jams at Delhi-Gurugram Border - 10 Points on 'Dilli Chalo' Agitation.

"The farmers from Punjab as well as from Haryana will make a night halt inside Haryana territory in Sonipat district, close to the Singhu border," Bharatiya Kisan Union (Charuni)'s Haryana unit chief Gurnam Singh Charuni said over phone.

It was felt a night halt should be made close to where farmers have gathered since many peasants from Punjab are still on their way and are likely to join them over the next few hours.

On Friday afternoon, Delhi Police allowed farmers to hold their protest at north Delhi's Nirankari Ground - one of the biggest grounds in the national capital.

Earlier in the day, Krantikari Kisan Union president Darshan Pal had said that officials of the Union Home Ministry had allowed them a place in Delhi to hold the agitation

More farmers from Punjab are on their way to Haryana as part of their 'Delhi Chalo' protest march. A number of women are also part of the protesters and are headed towards Delhi in tractor trolleys and other vehicles.

Farmers owing allegiance to Bharatiya Kisan Union (Ekta- Ugrahan), one of the largest farm bodies in the state, who entered Haryana from Khanauri border, were about 120 km away from the national capital. Farmers Protest: Picture of Young Navdeep Singh Jumping on Top of Water Cannon to Turn Off Tap Becomes 'Symbol of Agitation'.

This group of farmers has decided to halt for the night in Haryana and make an early morning move towards Delhi. Farmers owing allegiance to Kisan Mazdoor Sangharsh Committee (KMSC) were also headed to the national capital. The farmers are protesting against the three new laws that deregulate sale of farm produce. They say this will dismantle the minimum support price (system).