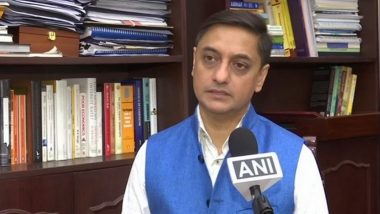 New Delhi, June 16: Amid the ongoing spat between the Centre and microblogging platform Twitter, the Principal Economic Advisor of the Union Finance Ministry Sanjeev Sanyal on Wednesday said foreign companies must follow the national laws of India and the country should not allow digital colonisation.

Speaking to ANI, Sanjeev Sanyal said, "Companies domestic or foreign need to follow the national laws of India and that is particularly true when we are in a situation where foreign companies begin to take sides in internal political debates. In our long history, there are many instances of foreign players interfering in Indian internal policy matters. The obvious example is that of the East India Company where that interference in internal politics led to foreign colonization." Twitter Loses Its Status as Intermediary Platform in India Due to Non-compliance With New IT Rules.

"Now it may not happen physically this time around but even digital colonization is bad enough. So I think as Indians we should leave aside our personal political preferences and take this matter seriously and not have opinions on the matter. We should not allow foreign entities to interfere with our internal debates in any way. This is a very slippery slope and it can only end badly," emphasized Sanyal. IT Minister Ravi Shankar Prasad Blasts Twitter, Says It Failed to Comply With New Guidelines.

Talking about the current state of the economy, he said that the second wave of COVID-19 has been a very severe attack on the health of people but economically it has not impacted much when compared with the first wave.

Citing inflation a big challenge, Principal Economic Advisor said, "If we see globally, inflation is hurting all the economies and this time we need to focus on it and efforts should be made to control it. We have seen this inflation due to an increase in petrol-diesel prices. We need to balance the fuel prices but we have many targets like how to control inflation, how to fund social welfare schemes, how to bring momentum in the economy...we have to balance between all these things."

Sanyal further said that India will not miss the disinvestment target but some impact on fiscal deficit target can be observed. He reiterated that if there is a need for any stimulus package, the government will provide it.

"In the budget, government has done many provision for expenditure. We were unable to spend and implement budgetary provisions due to the second wave in March-April, but now it is the time to implement as the economy is unlocking," stated the Principal Economic Advisor.