The duo tried to escape but was caught by police personnel. 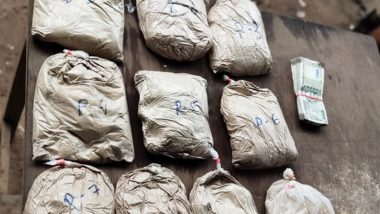 Imphal, March 24: Manipur Police has seized heroin worth Rs 1.47 crore in the international market and arrested two persons at Kakching district on Wednesday, an officer said.

Superintendent of Police, Kakching, Victoria Yengkhom in a statement said that two persons riding a two-wheeler were told by police to stop for checking at Kuraopokpi near St Joseph Higher Secondary School. The duo tried to escape but was caught by police personnel. Maharashtra: 20 Nabbed For Consuming Banned Drugs Openly in Public Places in Pimpri Chinchwad.

On searching the vehicle, the police team recovered two packets of heroin from the two-wheeler. She said the police team had earlier received input about possible smuggling of drugs from the Indo-Myanmar border town of Moreh in Manipur to the state capital Imphal. Two persons have been arrested and a case registered at Kakching police station, the SP added.