Under him the foreign policy of India moved decisively away from pure Nehruvian idealism to more pragmatic pursuits of national self-interest," Tharoor added. 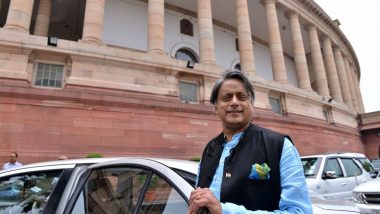 Hyderabad, August 30: The P V Narasimha Rao government was successful in maintaining good relations with neighbouring countries through reasonable, conciliatory and accommodative approach while the present BJP dispensation has "failed" in the area, Congress MP Shashi Tharoor claimed on Sunday.

He was addressing through video conferencing the event held as part of the year-long birth centenary celebrations of Rao, who hailed from Telangana, by the Congress.

"The reason things are so bad today is first -- a divisive, ideologically driven and arrogant politics which our neighbours pay attention to," Tharoor alleged, replying to a query on how he compared the foreign policy handling of Rao and the current Prime Minister Narendra Modi. Also Read | India's COVID-19 Recovery Rate Improves to 76.61%, Over 27 Lakh Patients Recover.

"Second, huge difference in personality between the arrogance of the current leadership in our country and the quite, understated, humble approach of Narasimha Rao," he said. The Thiruvananthapuram MP said Narasimha Rao was pragmatic and wanted to "change things" without seeming to be changing any.

"Finally, Narasimha Rao was pragmatic...he wanted to change things without seeming to bechanging any...you never hear a speech from him saying that all our previous foreign policies arebad and I am changing everything. He portrayed everythingwas incontinuation of the past but at the same time he brought about fundamental changes," he added.

According to Tharoor, Narasimha Rao knew the art of how to relate to the neighbourhood in an asymmetrical fashion -- show these countries that India will give more than it takes as opposed to the present regime. "For example in the confrontation with Nepal over the new Constitution (there) it looked like India was demanding more from Nepal than Nepal could feasibly give...that is not the approach by a big country to a small country.

"We have to go out of our way to be reasonable, conciliatory and accommodative. Sadly, this is where the present regime has failed and this is where Narasimha Rao succeeded," Tharoor said. He further said in one of India's most difficult periods in 1991, India was blessed with an extraordinary statesman and a visionary leader in Rao, who according to him changed the country's fortunes in an exceptionally transformative way.

His skilful management of alliances and courage to introduce bold economic reforms with Manmohan Singh (who was finance minister in his cabinet) fundamentally changed India, he added.

"He achieved this despite not being a popular mass leader, presiding over a minority government and as an accidental prime minister. Under him the foreign policy of India moved decisively away from pure Nehruvian idealism to more pragmatic pursuits of national self-interest," Tharoor added.