Though the Centre had undertaken before the top court to put in place the infrastructural requirements for women candidates by May 2022, it has limited the number of intake to 19 candidates for this year also, the apex court was told. 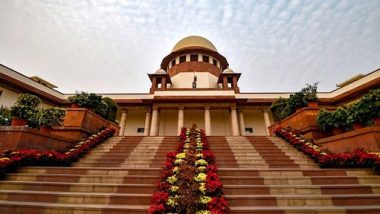 New Delhi, January 18: The Supreme Court on Tuesday sought a response from the Centre regarding the intake of only 19 women candidates in the National Defence Academy (NDA) and other military-run schools and colleges for the year 2022. A Bench of Justice Sanjay Kaul and MM Sundresh issued notice to the Centre after it was informed that 19 women candidates would be admitted in NDA out of a total of 370 seats.

The apex court asked the Centre to make its stand clear on restricting the intake of women candidates in NDA to 19, the figure that is the same as last year. It asked the Central government to place the figures on record about the total number of candidates including women who have appeared in the NDA examination 2021, for entrance tests for Rashtriya Indian Military College (RIMC) and for Rashtriya Military School (RMS).

Counsel appearing for petitioner Kush Kalra told the Bench that even for the 2021 examination, the intake of women candidates was limited to 19 for the Army, Navy and Airforce. GATE 2022 Admit Card Released At gate.iitkgp.ac.in; Here Are The Steps to Download Hall Ticket.

Though the Centre had undertaken before the top court to put in place the infrastructural requirements for women candidates by May 2022, it has limited the number of intake to 19 candidates for this year also, the apex court was told.

The Bench said, "The figure is the same as for the 2021 test. Last year, you said that it was due to infrastructure problems that the intake of women will be less. Now, again for the year 2022, you have proposed to take the same number of women candidates. Why have you fixed this figure? You have to explain this. 19 seats cannot be for all times to come. It was only an ad hoc measure."

The Central government told the Bench that the intake of women candidates in NDA depends on the requirement of force and agreed to file a detailed affidavit within three weeks explaining its stand. CBSE Releases Class 10, 12 Boards 2022 Sample Question Papers For Term II Exams, Find Link Here.

The top court gave three weeks to the Centre to file an affidavit and asked the parties to file their rejoinder in two weeks thereafter and listed the matter for further hearing on March 6. Last year, the apex court had directed that female aspirants be allowed to appear in the NDA entrance examination.