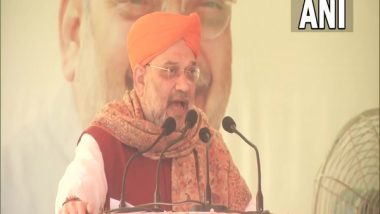 Can a Chief Minister who cannot provide a secure route to the Prime Minister of India provide security to Punjab, asked Shah while arressing a rally in Ludhiana. Punjab Assembly Elections 2022 Dates And Full Schedule: Voting on February 20, Counting And Results on March 10.

Shah launched scathing attack on Channi, who is the Chief Ministerial face of the Congress for the Punjab Assembly elections. "Channi Sahib is dreaming of forming a Congress government in Punjab again. He's a CM who couldn't provide a secure route to Prime Minister of India. Can he provide security to Punjab?" asked Shah said while addressing a rally at Daresi ground in Ludhiana.

Shah asserted that the BJP alliance government if formed in the state will firmly deal with the issue of drugs. "On forming the government in Punjab, we will establish Narcotics Control Bureau branch offices in four cities of the state," he added.

"For drug prevention, we will form a task force in each district of the state," he added. Earlier in January, Prime Minister's convoy was stuck on a flyover for 15-20 minutes due to road blockage by some protestors about 30 km away from the National Martyrs Memorial in Hussainiwala in Punjab.

Punjab will go to the Assembly polls on February 20 and the counting of votes will take place on March 10. In the 2017 Assembly polls in the state, the Congress had won an absolute majority by winning 77 seats and ousted the SAD-BJP government which had been in power for 10 years.