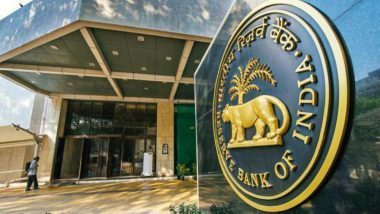 New Delhi, June 30: The Reserve Bank of India (RBI) on Tuesday released data relating to India's International Investment Position as it stood at the end of March 2020. The ratio of overseas financial assets to India's GDP in 2019-20 (at current market prices) moved up to 26.5 per cent in March 2020 as compared to 23.4 per cent a year ago. Also Read | Maharashtra Congress Minister Nitin Raut Hits Back at Sharad Pawar For Chiding Rahul Gandhi on India-China Face-Off.

As per the data provided by RBI, international financial assets of Indian residents increased by USD 73.9 billion due to the rise in reserve assets and overseas direct investment by USD 64.9 billion and USD 13 billion, respectively, though other investments declined marginally during the year ending March 2020. Also Read | 260 New COVID-19 Positive Cases Reported in Jammu and Kashmir Today: Live News Breaking & Coronavirus Updates on June 30, 2020.

Despite a fall of USD 13.7 billion in portfolio investment during the year, international financial liabilities increased by USD 16.3 billion as direct investment and other investments rose by USD 19.0 billion and USD 11.0 billion, respectively.

The decline in net foreign-owned assets in India was due to a reduction of USD 28.1 billion in the non-residents' assets combined with an increase of USD 17.7 billion in Indian residents' foreign assets.