While justifying the states demand for more vaccines, Patnaik claimed that Odisha has been performing very well in vaccination. Odishas vaccine wastage is among the lowest in the country, the chief minister said. 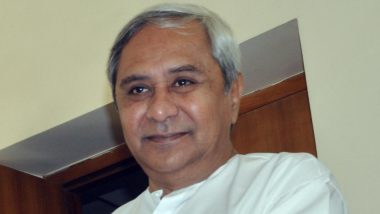 Bhubaneswar, July 16: Odisha Chief Minister Naveen Patnaik Friday requested Prime Minister Narendra Modi to allow inoculation of children in the age group of 12 to 18 years at the earliest due to the anticipated third wave of the COVID- 19.

The chief minister also demanded an increase in the allocation of vaccines for the state to 95 per cent, and a reduction in the share of private hospitals to 5 per cent, to expedite the COVID-19 inoculation drive in the state.

Voicing concern over a possible third wave and its impact on children, Patnaik proposed, "I would like to request that the vaccines for the age group of 12-18 years may be prioritised and rolled out at the earliest." Odisha CM Disburses Rs 385 Cr COVID Assistance to 26 Lakh Registered Construction Workers.

PM Modi on Friday held an interaction with chief ministers of Tamil Nadu, Andhra Pradesh, Karnataka, Odisha, Maharashtra and Kerala, which accounted for 80 per cent of the new Covid cases last week in the country. The prime minister urged the six states to take proactive measures to prevent a third wave and stressed on moving forward with the strategy of test, track, treat, and 'tika (vaccine)'.

Official sources said that as many as 49,076 children below 14 years tested positive for COVID-19 during the first wave and the prevailing second wave of the pandemic in Odisha. Patnaik also demanded that the vaccine distribution between the state government and private hospitals should be in the ratio of 95:5 instead of the existing 75:25.

The chief minister made the demand before the prime minister after the state governments letters to the Ministry of Health and Family Welfare and the minister concerned failed to yield any result. Earlier, Odishas Health and Family Welfare Minister N K Das had written several letters to his counterpart in the Union Government. Additional Chief Secretary of the department P K Mohapatra had also requested the ministry to modify the vaccine allocation policy.

The state government believes that due to the low presence of private hospitals in the state, the lifting of the vaccines from the 25 per cent quota has been less. On the other hand, the state government which has the infrastructure for inoculating over 3 lakh people on a single day, is facing an acute shortage of vaccines.

The scarcity of vaccines has led to a suspension of inoculation drives for several days in a month. While justifying the states demand for more vaccines, Patnaik claimed that Odisha has been performing very well in vaccination. Odishas vaccine wastage is among the lowest in the country, the chief minister said.

In a related development, the Odisha government Friday launched an inoculation drive for pregnant women and lactating mothers. The state government wants to inoculate pregnant women ahead of the possible third wave of the pandemic in the country, State Immunisation Programme chief Bijay Panigrahi said.

Panigrahi said a special feature has been added to the CoWIN portal for the vaccination of expectant mothers. The beneficiaries can book slots on the website and receive the shots at the nearest vaccination centres.

Approximately, 9 lakh pregnant women register themselves every year to get benefits under various schemes, of which 4 lakh beneficiaries will be given the COVID-19 jab in the first phase, Panigrahi said. Auxiliary nurse midwives (ANM), ASHA and Anganwadi workers, as well as other health workers, have been imparted training for administering vaccines to pregnant women.