Get latest articles and stories on India at LatestLY. Bharatiya Janata Party president JP Nadda on Saturday lauded Prime Minister Narendra Modi's leadership in his opening remarks at the party's national executive here and said the government had deftly dealt with various challenges including COVID-19 and evacuation of Indian students from Ukraine, sources said. 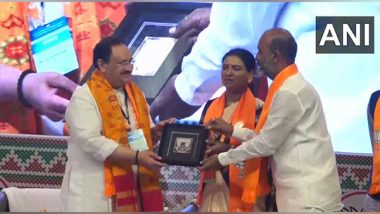 In an apparent swipe at the ruling Telangana Rashtra Samithi, the BJP chief said "parivarvad is being defeated by vikasvad" under the Modi government. He said dynastic politics is getting rejected by people due to politics of development.

The BJP chief credited the Prime Minister for the repeated electoral victories of the BJP including in Uttar Pradesh, Manipur where polls were held earlier this year, the sources said. He said there was "pro-incumbency" for BJP in the states it won.

Nadda began his speech by lauding PM Modi's leadership whether it was managing the COVID-19 challenge or the difficult mission like that of rescuing Indian students struck due to the Ukraine conflict.

The party president also spoke about the "violence that the party workers have to deal with" in Jammu and Kashmir, Bengal and Kerala and said they deserve the utmost respect for the sacrifices that they have been making.

He said that BJP's electoral victories were a reflection of the good governance of the Modi government, especially the work done for the poor and the marginalised sections. The PM Garib Kalyan Yojana has been extremely effective on the ground, he stressed.

The BJP national executive got underway in Hyderabad this afternoon in the presence of top party leaders including PM Modi and Nadda.