Police also said that various groups in WhatsApp, Telegram and Facebook were being closely monitored by them. 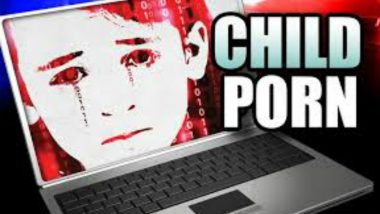 Thiruvananthapuram, October 5: In a crackdown on child pornography, the Kerala police have arrested 41 people, including IT savvy youth and those working in professional jobs, for allegedly sharing sexually explicit material involving children through the social media using hi-tech methods.

The Counter Child Sexual Exploitation (CCSE) team of the police also seized a large number of electronic devices, including laptops and mobile phones, during simultaneous raids at around 326 locations across the state on Sunday in an operation named 'P Hunt_20.2', a police release said here.

Following the routine raids, police arrested 41 people and registered 268 cases for propagating child pornography, viewing, distributing or storing of which was a criminal offence punishable with imprisonment up to five years and a fine up to Rs 10 lakh. Child Pornography: Delhi Uploaded Maximum Child Sexual Abuse Material on Social Media Platforms in Last Five Months; Over 25,000 Cases Reported in India.

"Based on the recovery of the devices with the CSAM (child sexual abuse material), 41 arrests were made. These include youth working in good professional jobs and most of them are IT savvy, which is the reason why they were using all kinds of encrypted handles to upload and download the material," it said.

Police said they suspect some of those arrested could be involved in trafficking of children also as there were many chats to this effect in their devices. Police also said that various groups in WhatsApp, Telegram and Facebook were being closely monitored by them.

Seeking the support of the community, police asked anyone coming across any such channels or groups spreading child sex-related content to inform the Hi Tech Crime Enquiry Cell, Cyberdome or Cyber cells considering "child security as the responsibility of every member of the society". Child Pornography: Government Takes Down 377 Websites Promoting Child Sexual Abuse, 50 FIRs Registered.

The CCSE, formed with special emphasis on preventing online child exploitation and pornography, has been carrying out such raids and had arrested 12 people in October last year. It works in close contact with the INTERPOL-Crimes against Children Unit and the International Centre for Missing and Exploited Children (ICMEC).