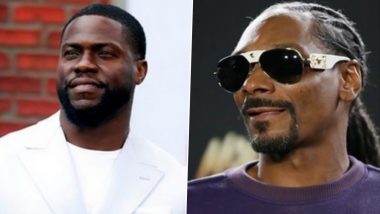 American stars Kevin Hart and Snoop Dogg will be recapping the Tokyo Olympics 2021 by teaming up with Peacock for the commentary series Olympic Highlights with Kevin Hart and Snoop Dogg. According to Variety, the pair will set out to summarise the Olympics' most impressive displays of athleticism, as well as the moments that don't go as planned, exclusively available on NBC's streaming service. MacGruber Series at Peacock Ropes In Sam Elliott, Laurence Fishburne and Mickey Rourke to the Cast.

NBCUniversal has remained confident with its plans to broadcast up to 7,000 hours of Tokyo Olympics events. 'Olympic Highlights' only reinforces the notion that Peacock will be a critical asset of their strategy. The series will be produced by Hart's LOL Studios. Paul Pawlowski will serve as showrunner and executive producer, along with executive producers Hart, Jeff Clanagan, and Candice Wilson Cherry. Tiffany Haddish to Portray Olympic Icon Florence Griffith Joyner in American Athlete’s Biopic.

Hart had signed a multi-year deal with streamer Peacock last year. The deal includes an equity investment in the company, a first-look deal with LOL, and the distribution of LOL's catalogue on the service. In addition to 'Olympics Highlights', Hart is set to produce an exclusive stand-up comedy special and an original interview series 'Hart to Heart' for the streaming service.

As per Variety, in addition to Hart and Snoop, late-night host Amber Ruffin will offer her commentary for the streaming service from the ground in Tokyo.

Cari Champion and Kenny Mayne, two veteran broadcasters who recently left ESPN, will co-anchor 'Tokyo Tonight', a quick-turnaround highlights and interviews program. Lindsay Czarniak, Lolo Jones and MJ Acosta-Ruiz will anchor 'On Her Turf', which will be focusing on women's sports at the Olympics.