Magh Bihu in Assam, Pongal in Tamil Nadu, Lohri in Punjab - Here's How Makar Sankranti is Celebrated in India

India is a land of immense devotion and festivities, where we have a plethora of cultures and traditions. When it comes to the Hindu culture, Makar Sankranti is one significant festival dedicated to Lord Surya or the Sun God. 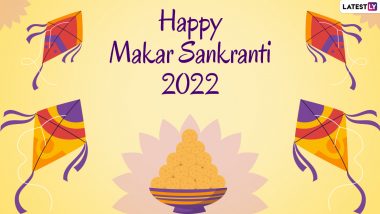 New Delhi, January 13: India is a land of immense devotion and festivities, where we have a plethora of cultures and traditions. When it comes to the Hindu culture, Makar Sankranti is one significant festival dedicated to Lord Surya or the Sun God.

Makar Sankranti is celebrated differently in different parts of India. So let's have a look:

1. Punjab, Delhi, and Haryana: Celebrated as Makar Sankranti, on this auspicious day, all brothers visit their married sisters and gift them warm clothes and sweets. Married women gift their in-laws shawls, sweets, clothes, and much more as a mark of care and respect. Families gather at one place to enjoy the festival cheerfully. Lohri 2022: Date, Significance, History and Celebrations Related to Harvest Festival in Punjab.

2. Tamil Nadu: In Tamil Nadu, Makar Sankranti is celebrated as the festival of Pongal. This festivity is observed for four days consecutively and each day has a special meaning. On the first day, people clean up and de-clutter their houses as well as decorate them. Apart from that, they wear new, colourful clothes while throwing away the old ones. Pongal 2022 Full Calendar With Dates of Bhogi, Thai Pongal, Mattu Pongal and Kaanum Pongal, Know Everything About This Four-Day Festival of Tamil Nadu

On the second day, which is the main Pongal day, people make delicious sweets and rice dishes. The rice is boiled along with milk and jaggery and left to boil in a pot. As soon as it boils over the pot, the people utter a prayer, and Pongal celebrations begin. This rice dish is offered to God and then to the people.

During the other two days of Pongal, people visit each other to gift sweets and worship the cattle. During the Pongal celebration, people also make rangolis to add a touch of vibrancy to the festival.

3. Gujarat: In Gujarat, people celebrate this festival as Uttarayan and the state is famous for its International Kite Flying Festival. Once people are done with their morning prayers, they gather on the terrace of their houses with colourful kites. And the festival begins!

You can hear people shouting "Kai Po Che" to the losing side during the kite flying festival. Apart from that, people devour delicacies such as Chikki, made up of sesame seeds and peanuts along with Undhiyu, made up of winter vegetables.

4. Assam: Makar Sankranti is celebrated as Bihu in Assam and also marks the beginning of the Assamese New Year. On this day, people wear traditional clothes like dhoti, gamosa, and saadar mekhela. Along with that, they celebrate by singing traditional folk songs as well as dancing.

5. Uttarakhand: In Uttarakhand, Makar Sankranti is celebrated as Gughuti, which is the festival of welcoming the migratory birds. The people feed Khichdi and other food items as a charity as well as organise donation camps.

Along with that, flour and jaggery are used to make sweets and then deep-fried in different shapes. These sweets are then offered to the crows by children. Apart from that, the crows are also fed Puri, Vade, and Puwe. It is believed by the locals that the child who is able to feed a crow first is the luckiest.

Apart from that, they visit their friends and family and gift them sweets like chikki or khichdi and ghee. It is a day when a lot of donations and charities are made by the people. In the evening, the locals celebrate by singing folk songs and dancing.

Also known to strengthen the bond of friendship, this festival is all about making khichdi, kite flying, sesame sweets, and coconut laddoos. Makar Sankranti marks a message, that the winter season is now clearly, leaving. Happy Makar Sankranti! (By Deepti Dogra)