"People overlooked me. I wasn't the tallest kid when I was little. People said, 'What are you talking about? She's so small. What are you doing? This is a joke,'" Sofia said. 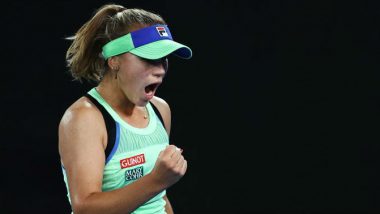 Melbourne, February 2: It wasn't so long ago that Sofia Kenin's father was driving New York taxis and spoke English so poorly that he didn't know where he was supposed to be going. These days Alex Kenin, despite starting with close to zero tennis knowledge, is coaching a Grand Slam champion.

Russian-born Alex, an unassuming, grey-haired man with a receding hairline, introduced Sofia to tennis, brought her up around the game and pushed her to achieve the extraordinary -- crowned by her victory at the Australian Open on Saturday. Sofia Kenin vs Garbine Muguruza, Australian Open 2020 Free Live Streaming Online: How to Watch Live Telecast of AUS Open Women’s Singles Final Tennis Match?

Sofia said her "crazy smart" father had no prior experience of the game, but simply picked it up by observing those around him. "He's seen how all the other coaches have been coaching their players, but he knows everything," Sofia said, after stunning Garbine Muguruza in her first Grand Slam final.

"He knows what he's talking about, he really knows it and he comes up with the right plans, the right strategies." If Sofia's achievement is remarkable, it owes a great deal to her father, who was ever-present courtside during her increasingly impressive run through the Melbourne women's draw.

Teenage prodigy Coco Gauff, world number one Ashleigh Barty and, in the final, two-time Major-winner Muguruza all fell victim to tough-as-boots Sofia, who was following strategies drawn up by her wily father. He joins a long list of tennis dads who have produced champions, including Richard Williams, father of Venus and Serena, Mike Agassi (Andre) and Yuri Sharapova (Maria).

But unlike some other fathers, whose influence has been resented or even negative, Alex and Sofia, 21, remain close and affectionate. "I really have him to thank. We've been dreaming about this -- it's a dream come true for us," Sofia said. "He's told me a lot of positive things. He knows exactly what he's talking about. "Even though I don't like to admit it sometimes, to tell him he's right. Yeah, he really works hard. Just thank you to him. We can share this forever."

Alex Kenin arrived in New York from what was then the Soviet Union in 1987 with his wife, Lena, and a few hundred dollars in his pocket, searching for the "American Dream". He drove a taxi by night and went to English and computer school during the day, a period he describes as "very, very tough".

"I had to work at night, go to school in the morning. Driving in New York, speaking English on the (taxi) radio. I had no idea what they were saying," he said. "But it's amazing the things you do to survive. (Sofia) knows about that and I think it made her tough."

Sofia clearly had talent from a young age, but they remained outsiders and making it on the tennis circuit was never easy. "People overlooked me. I wasn't the tallest kid when I was little. People said, 'What are you talking about? She's so small. What are you doing? This is a joke,'" Sofia said.

"We didn't have the best things said about me but my dad's been there and he believed in me, didn't listen to that. He could have easily said, okay, and I could have done something (else)." Sofia represented America at the 2014 Youth Olympics, made her Grand Slam debut as a wildcard at the 2015 US Open and broke into the top 100 in March 2018.

Her career really took off last year, when she won three singles titles and rose to a world ranking of 12. But despite her recent success, nobody predicted her victory in Melbourne. During Saturday's final, Alex could barely watch as Sofia closed on the win, and he filmed her winner's speech -- which was beamed live worldwide -- on his mobile phone.