Azerbaijan GP 2021: One Minute Silence to Be Observed Ahead of Formula 1 Race for Mansour Ojjeh

Buoyed by the investment, the squad soon won their first race and championships, before then-McLaren boss Ron Dennis convinced Ojjeh to invest in his team, where he remained a senior figure for more than 30 years. 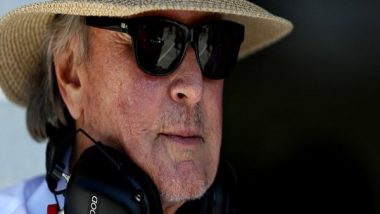 London, June 6: Formula 1 team McLaren on Sunday announced that Mansour Ojjeh, a shareholder and significant figure in the team since 1984, has passed away aged 68. A minute's silence will be held ahead of the Azerbaijan Grand Prix for Ojjeh and former FIA President Max Mosley, who passed away last month.

Ojjeh first became involved in motor racing in 1979, when TAG - the group founded by his father - became sponsors of the Williams team. Buoyed by the investment, the squad soon won their first race and championships, before then-McLaren boss Ron Dennis convinced Ojjeh to invest in his team, where he remained a senior figure for more than 30 years.

"The passing of Mansour Ojjeh has devastated everyone at McLaren Racing," said McLaren Racing CEO Zak Brown in an official release. "Mansour has been etched into the heart and soul of this team for nearly 40 years and was intrinsic to its success. He was a true racer in every sense. Ultra-competitive, determined, passionate, and, above all, perhaps his defining characteristic: sporting. No matter the intensity of the battle, Mansour always put sport first," he added. 2021 Formula 1 Azerbaijan Grand Prix: Check Out Live Streaming and Online Telecast Details of Final Race at Baku City Circuit.

Figures from across the world of F1 offered their own tributes to Ojjeh, including F1 President and CEO Stefano Domenicali. "I was shocked to hear that our very good friend Mansour has passed away," he said.

"He was someone with incredible talent, passion, and energy and was a giant of our sport. I will miss him greatly and so will the whole F1 community. Our thoughts and prayers are with his wife Kathy and their beautiful family who he was utterly dedicated to and who were his real passion in life," he added.