Chelsea manager Thomas Tuchel has said his side is also preparing for the penalty shootout if the Champions League final goes down that road. 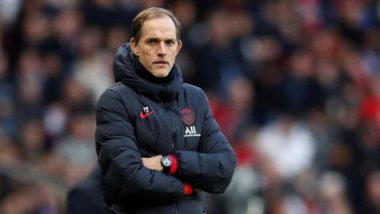 Porto, May 29: Chelsea manager Thomas Tuchel has said his side is also preparing for the penalty shootout if the Champions League final goes down that road.

Manchester City will face Chelsea in the finals of the Champions League later on Saturday in Porto. Guardiola's side has already won the Premier League and Carabao Cup this season. On the other hand, this is Chelsea's first Champions League final since the side won the title way back in 2012. UEFA Champions League 2020-21 Final: Check Manchester City's Predicted Starting XI For UCL Clash Against Chelsea.

"We always practice penalties when facing a match where it is possible to end in this way. Can we simulate the pressure, the fatigue, the occasion and how it will be? No. But still we believe we can take care of that, a certain rhythm and habit during penalties. Honestly, the penalty shootout was fantastic [Man Utd vs Villarreal] in terms of quality from the takers, I don't think I ever saw something like that, 20 in a row with no misses," Goal.com quoted Tuchel as saying.

"Such belief is well taken. Let's see, we have the guys we have identified who should take the penalties for us but I don't know in the end who will be on the pitch. But we are prepared if we go into penalties we go in there together and

we leave them together," he added.

The Blues manager also confirmed that every member of the squad is fit and raring to go for the finals.

"It is the best news ever, no injuries and I hope it stays like this until after the training today," said Tuchel.

This is the first time that City has managed to enter the finals of the Champions League. Guardiola has the experience of managing and winning two finals with Barcelona, as well as winning one as a player.