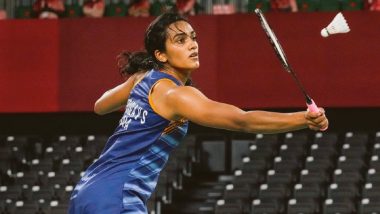 Odense [Denmark], October 19 (ANI): India shuttler PV Sindhu on Tuesday marched ahead to the next round of the ongoing Denmark Open.

Sindhu defeated Turkey's Neslihan Yigit 21-12, 21-10 in a match that lasted for 30 minutes. The ace Indian shuttler dominated the entire match and her Turkish opponent was left struggling to search for answers.

Earlier in the day, India men's doubles pair of Chirag Shetty and Satwiksairaj Rankireddy progressed to the next round of the ongoing Denmark Open.Ranveer Singh, Deepika Padukone Have a ‘Smashing Time’ With PV Sindhu As They Celebrate Her Tokyo Olympics Win in Town (View Pic)

The Indian duo defeated England's Callum Hemming and Steven Stallwood 23-21, 21-15 here at Court 3. Earlier in the day, Srikanth Kidambi got the better of compatriot B Sai Praneeth in straight sets in the men's singles 1st round of Denmark Open here at the Odense Sports Park on Tuesday. Playing at court-2, Kidambi inflicted a 21-14, 21-11 defeat on Praneeth in just 30 minutes. With this win, Kidambi has now moved into round-of-16 in the World Tour Super 1000 event in Denmark. Srikanth completely outclassed and dominated Praneeth in both games. This was also 3rd consecutive win for Srikanth against Sai Praneeth. Both players were last seen in action in the Thomas Cup quarterfinals where Denmark defeated the Indian team.