The player in now in hospital and in a stable condition. UEFA wishes Christian Eriksen a full and speedy recovery and wishes to thank both teams for their exemplary attitude." 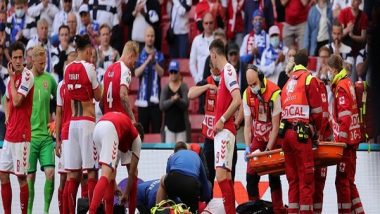 Christian Eriksen collapsed on the field during the match

The match had to be stopped in the dying minutes of the first half as Denmark's Christen Eriksen collapsed on the pitch and he had to be taken off due to a medical emergency.

"Following the request made by players of both teams, UEFA has agreed to restart the match between Denmark and Finland tonight at 20:30 CET (TBC). The last four minutes of the first half will be played, there will then be a 5-minute half-time break followed by the second half," UEFA said in an official statement. Christian Eriksen Health Update: Denmark’s Mid-Fielder Stabilised in Hospital.

In another tweet, UEFA said: "The match had been suspended due to a medical emergency which involved Denmark's, Christian Eriksen. The player in now in hospital and in a stable condition. UEFA wishes Christian Eriksen a full and speedy recovery and wishes to thank both teams for their exemplary attitude."

The European football governing body also confirmed that the match scheduled between Belgium-Russia will go ahead as planned. "Tonight's UEFA EURO 2020 match between Belgium and Russia will go ahead at 21.00 CET as planned," said UEFA. What Happened to Christian Eriksen? Denmark's Mid-Fielder Collapses on the Pitch During Euro 2020 Match Against Finland, Game Suspended.

Earlier on Saturday, Denmark star Christian Eriksen was hospitalised after he suddenly collapsed just before half-time in a Euro 2020 match against Finland. The game between Denmark and Finland in Copenhagen was then suspended due to a medical emergency.

Eriksen's teammates formed a ring around him as he was being attended by doctors. The midfielder was carried off in a stretcher but he is awake and has been subjected to further examinations. Denmark vs Finland Euro 2020 Match to Restart Following Christian Eriksen’s Collapse.

"Christian Eriksen is awake and is for further examinations at Rigshospitalet. The match is temporarily postponed. New message comes at 19.45," Danish Football Association tweeted.