During the last cycle, the value for each series was 120 points where a two-match India-Bangladesh series had 60 points for a win while a four-match India-Australia Test series had 30 points in store per victory. 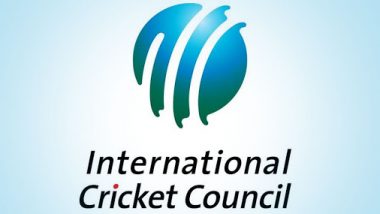 New Delhi, June 14: The much-debated World Test Championship points system is set to undergo a change during the second edition where all teams will get "same standardised number of points" for winning a game rather than the 120 allocated per series, ICC interim CEO Geoff Allardice said on Monday.

During the last cycle, the value for each series was 120 points where a two-match India-Bangladesh series had 60 points for a win while a four-match India-Australia Test series had 30 points in store per victory.

However, during the last phase with lot of series cancelled, ICC reverted to the percentage points system where a team's ranking was calculated on the basis points divided by the number of matches played. ICC WTC 2021 Final: Winner to Take Home Purse of $1.6 Million Along with Test Championship Mace.

"We have looked at this at the end of this cycle as well and we have the second cycle starting in a month and a half and there will be some tweaks to the points system," Allardice said during an interaction with select media outlets. "...We can put in a standardised number of points for per Test match, so that it doesn't matter whether it's a two Test series or a five-Test series, so same number of points will be available for each match that's played.

"But every team will be judged on percentage of points its wins and not on total," Allardice explained. While COVID-19 did wreak havoc on the calender, an India-New Zealand final after taking all postponements into account is a fair result, he said.

"One of the things that happened during this cycle was that it became evident that not everyone was going to complete their six series as a result of postponements due to COVID," he reasoned.

"Because we have had teams playing uneven number of series, we made it a point to tweak the points system and make it as fair as possible and make sure that it reflected the matches that we did play rather then being influenced too heavily by the series we didn't play."

Allardice felt that it was a "fair system" as New Zealand didn't play one series due to COVID related postponements but they have still been able to qualify by the strength of their performance in the other series.

"We preferred to have not changed the points system in the middle of a tournament but (because of) the circumstances due to COVID, we needed to ensure that the best two teams got to the final."

India coach Ravi Shastri had suggested a three-match final which he believes is an ideal assessment of a team's performance graph over two year period but Allardice pointed out the practical difficulties surrounding that idea.

"In a perfect world, a three Test series would be a great way to decide the WTC but reality of international cricket schedule is such that we are not going to get a month."

"....blocking out a month for all team tournament final isn't realistic, so that's why one match final was decided upon. Why it's quite exciting is it brings in something new. We have a one-off Test match to decide we have the best Test team in the world." WTC Final 2021: Virat Kohli Praises Mohammad Siraj and Ishant Sharma for Their Preparations Ahead of New Zealand Clash.

He also felt that even if weather plays spoilsport, five days of Test cricket with a reserve day to cover time is good enough and if no result still comes out, declaring joint winners is a fair deal.

"One of the idiosyncracies of Test cricket is that draw is a result. We didn't want to start the final with one team having to win and one team looking for draw," he said.

"Both teams start on Friday even and five playing days to get a result and we have a reserve day so that if time is lost, it can made up on the reserve day. It isn't a six-day Test match. "And after five days if we don't get a winner, whether you like it or not, draw is a fair result in Test cricket," he signed off.