But a final decision on whether the batsman will go for surgery is yet to be taken. 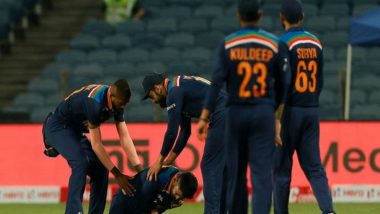 New Delhi, March 24: In what comes as a big blow not just for Team India, but also Delhi Capitals, batsman Shreyas Iyer may be forced to undergo surgery on his left shoulder and that could lead to him missing the whole of the 2021 edition of the Indian Premier League.

The DC skipper subluxated his left shoulder during the England innings in the first ODI at the Maharashtra Cricket Association Stadium on Tuesday. Speaking to ANI, sources in the know of developments said that while he was visibly in pain on the ground, Iyer was taken for further scans and the results have suggested that surgery could be the way forward. But a final decision on whether the batsman will go for surgery is yet to be taken.

"The preliminary view is that he requires surgery but further opinion has been sought from an expert in this regard and if surgery takes place, which seems likely, he would miss the entire IPL season," the source explained. IPL 2021: Devdutt Padikkal, Mohammed Azharuddeen and Other Uncapped Stars To Watch Out For in Indian Premier League Season 14.

Iyer had dived to his left in the field to stop the ball. While he did manage to cut runs off, he was holding the left shoulder in a lot of pain. He walked off holding the shoulder and Shubman Gill replaced him on the field.

Throwing light on his injury status, BCCI had in a media statement said: "Shreyas Iyer subluxated his left shoulder in the 8th over while fielding. He has been taken for further scans and won't take any further part in the game."

The opening ODI saw quite a few injuries with India opener Rohit Sharma being the first to be hit on the elbow while batting. Even though he didn't have to leave the field during his innings, he felt pain later and didn't come out to field.

Commenting on Rohit's right elbow, the BCCI in an official communication had said: "Rohit Sharma was hit on the right elbow while batting and felt some pain later. He won't take the field."

England too suffered blows during the India innings in the afternoon. While skipper Eoin Morgan split the webbing between his right thumb and index finger, Sam Billings hurt his collar bone joint while fielding at the boundary.

England team spokesman said: "Eoin has split the webbing between his right thumb and index finger. He has had four stitches inserted by the England team doctor. He expects to be able to bat. IPL 2021: Can Glenn Maxwell End Virat Kohli-Led RCB’s Drought in Indian Premier League?.

"Sam Billings has sprained his collar bone joint. It's not related to the previous shoulder injury he suffered in 2019. It's sore, he's currently receiving treatment and we are hopeful he will be able to bat later." Both did take strike in the England innings and while Morgan managed 22 off 30 balls, Billings got a 22-ball 18 as the visitors lost the opening game by 66 runs.