He didn't feel 100 per cent to play tomorrow. It's soreness in his tissue. Every decision taken involves both medical departments together for the good of the player," said Martinez. 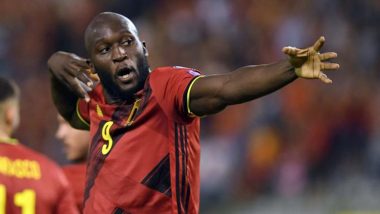 Brussels, October 10: Romelu Lukaku and Eden Hazard will not take part in the remaining international matches for Belgium due to fitness concerns, Belgium coach Roberto Martinez confirmed. Both Lukaku and Hazard had both played in Belgium's UEFA Nations League semi-final defeat against France on Thursday.

However, the duo will not play for Belgium later in the day in the third-place play-off against Italy after struggling with muscular fatigue following the semi-final.

"They're not in the best conditions to play. They're leaving the national team camp due to these problems - I don't know how long it will take for them to recover," Goal.com quoted Martinez as saying. Lukaku will not be immediately reporting to Chelsea. He will return to Belgium to seek treatment on the affected muscle. Cristiano Ronaldo Scripts Insane Records After Scoring for Portugal in International Friendly Against Qatar.

"It's fatigue. He didn't feel 100 per cent to play tomorrow. It's soreness in his tissue. Every decision taken involves both medical departments together for the good of the player," said Martinez.

"Obviously there is an excellent understanding between the two sets of medical staff and we want to do the best for the player. Every decision is also made in agreement with the club," he added.