Get latest articles and stories on Sports at LatestLY. Bilal has proved that one can accomplish anything if one has determination. 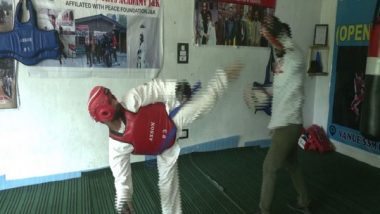 Budgam (Jammu and Kashmir) [India], June 26 (ANI): Bilal Ahmad, a Taekwondo player from the Budgam district of Jammu and Kashmir, has proved that one can accomplish anything if one has determination.

Coming from an economically weak background, Ahmad started playing the sport from his school days. Sports could only be played in cities as in villages and far-flung areas of Kashmir, there were barely any facilities to play sports and make a career out of it.

But Ahmad maintained his determination and became a national-level player in Taekwondo. He was encouraged well and started to go for practice to Srinagar in harsh winters. With his hard work, he started getting selected for local and national level championships.

"I joined a school in Budgam in class 5th. A coach named Syed Shuja in that school guided me in martial arts, from then onwards I started practising martial arts and it is still going on. He gave me coaching for a year after which I continued practising at home for 2-3 years," said Ahmad.

He supported me a lot, and made me play at the district, state and national levels. He also informed me that I could take part in an international championship. I am from a middle-class family. I could not meet my expenses. So my coach supported me a lot. He was taking a low fee and also paying for me out of his own pocket since I was playing well," he added.

His father is a government employee and Ahmad's family has a total of three brothers too. "So my dad and coach supported me a lot. That is how I was able to progress ahead to national and international events," he added.

His performances in these championships have earned him great recognition locally and many youngsters are inspired by his hard work. Ahmad started to coach the upcoming generation of players, who have a passion for the game while receiving coaching himself from his seniors at a local academy.

Ahmed tells that the sport of Taekwondo requires fitness and flexibility. "It is a game of self-defence," he added.

He is preparing for an international level championship in the sport in which he wants to win gold for his country. He is getting great training under guidance of experts and coaches and he hopes to win gold and make his nation proud.