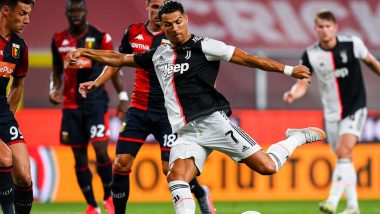 Genoa, July 1: Juventus secured a commanding 3-1 win over Genoa in the ongoing Serie A here on Wednesday. In the first half, both the clubs gave each other a tough competition, restricting one another from taking a lead.

However, Juventus needed just five minutes to break the deadlock in the second half as Paulo Dybala scored a stunning goal. Six minutes later, Cristiano Ronaldo turned the scoreline to 2-0 with a sublime solo effort.

Douglas Costa was brought on in place of Federico Bernardeschi in the 65th minute, and he needed less than 10 minutes to make an impact. With the help of Costa's goal, Juventus extended its lead to three goals. Cristiano Ronaldo’s Screamer Helps Juventus Win Serie A 2019-20 Tie Against Genoa by 3-1, Netizens Hail The Portugal Star (Watch Goal Video).

Genoa made a comeback with Andrea Pinamonti scoring a goal in the 76th minute. However, it was the only goal they scored in the match as the club suffered a 3-1 defeat. Juventus now have a four-point lead at the top of Serie A table.