Ben Stokes to Give IPL 2022 a Miss, Set to Sit out of Mega Auction: Report

Stokes, who represented Rajasthan Royals in last year's IPL was not retained by the franchise ahead of the upcoming mega auction. In the recently concluded Ashes, Stokes managed to score 236 runs and take four wickets. 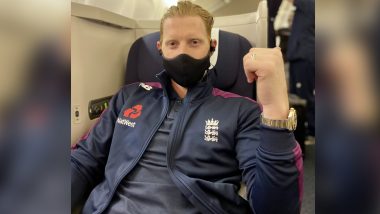 London, January 17: England all-rounder Ben Stokes is all set to miss the Indian Premier League (IPL) 2022 as he has decided to sit out the upcoming mega auction. As per UK's Evening Standard, Stokes will give this year's tournament a miss in order to stay fresh for England's summer season.

Stokes, who represented Rajasthan Royals in last year's IPL was not retained by the franchise ahead of the upcoming mega auction. In the recently concluded Ashes, Stokes managed to score 236 runs and take four wickets.

The all-rounder had also taken a break in order to look after his mental health in 2021 and it saw him missing the second half of IPL for Rajasthan Royals and the T20 World Cup. Earlier, England Test skipper Joe Root had confirmed that he has not given his name for the IPL 2022 mega auction as he wants to focus on rebuilding the Three Lions' Test side. Root's clarification came after England stumbled to a 146-run loss in the fifth Test, losing the Ashes 0-4. Steve Smith Wishes Wife Dani Willis on Her Birthday, Australian Cricketer Shares Lovely Picture of the Couple (See Pic).

"I didn't (give his name for auction), no, I think that there's a lot that we need to do for this team, which deserves all of my energy. I really hope I get the opportunity to do it. I'll keep sacrificing as much as I can because I care so much about Test cricket in our country and trying to get us to where we can," said Root during a virtual press conference.

IPL's two new teams -- Sanjiv Goenka RPSG Group for the Lucknow franchise and CVC Capital's Ahmedabad team have already received the formal clearance from the Board of Control for Cricket in India (BCCI).