Veteran singer-songwriter Elton John recently announced his new album titled The Lockdown Sessions featuring some big names from the music industry. The Grammy-winning artist made the announcement via a tweet 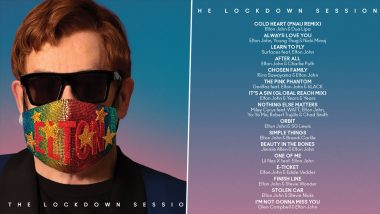 Veteran singer-songwriter Elton John recently announced his new album titled The Lockdown Sessions featuring some big names from the music industry. The Grammy-winning artist made the announcement via a tweet on Wednesday. He also shared the album's release date in the Twitter post. "The last thing I expected to do during lockdown was make an album but here it is. Thank you to everyone who came together to make it happen. I can't wait for you all to hear 'The Lockdown Sessions' when it's released on 22 October, but for now, preorder it from today," he wrote. Dua Lipa Opens Up About Collaborating With Sir Elton John For Single ‘Cold Heart’, Says It’s an ‘Absolute Honour’.

The album will include 16 tracks -- of those tracks, 10 unreleased -- and will feature collaborations with big artists. Names include Dua Lipa, Nicki Minaj, Miley Cyrus, Young Thug, Charlie Puth, Lil Nas X, Stevie Wonder and Stevie Nicks. Elton, while announcing the album, spoke about it in an Instagram video posted on Wednesday. The 'Rocket Man' singer said in the video that the making of the album was a "really fantastic journey." "I'm thrilled with every single track and I love and thank every single artist that I worked with because I had so much fun. And to have fun during lockdown is a privilege," Elton said in the Instagram video. Elton John Birthday: Bennie and the Jets, Rocket Man, Tiny Dancer – 5 Evergreen Songs by the Singer.

'The Lockdown Sessions', the Grammy-winner said, is a collection of songs he recorded during lockdown -- hence the name. "Some of the recording sessions had to be done remotely, via Zoom, which I'd obviously never done before. Some of the sessions were recorded under very stringent safety regulations: working with another artist, but separated by glass screens," Elton said in a statement, as per People magazine. However, the sessions made him realize he had come "full circle."

"I realized there was something weirdly familiar about working like this. At the start of my career, in the late '60s, I worked as a session musician. Working with different artists during lockdown reminded me of that. I'd come full circle: I was a session musician again. And it was still a blast," he wrote on Instagram.

'Cold Heart (PNAU Remix)', featuring Lipa, will be the first track on the album. The single -- which was released in August -- was the first we saw of Elton working with artists virtually to create music, as per People magazine. At the time, the 'Your Song' singer said it was "incredible" to work with the 'Future Nostalgia' singer.

The last thing I expected to do during lockdown was make an album but here it is. Thank you to everyone who came together to make it happen.

I can’t wait for you all to hear ‘The Lockdown Sessions’ when it’s released on 22 October, but for now, preorder it from today. pic.twitter.com/u8Qfvuk1Fk

"She's given me so much energy. She's a truly wonderful artist, and person, absolutely bursting with creativity and ideas. The energy she brought to 'Cold Heart' just blew my mind," Elton said. The singer is also currently preparing for his Elton John Farewell Yellow Brick Road: The Final Tour ahead of his retirement, reported People magazine. "I'm going to go out in the biggest possible way, performing at my very best, with the most spectacular production I've ever had, playing in places that have meant so much to me throughout my career," he announced on YouTube in June. The tour will kick off on September 28 in Copenhagen, Denmark.