Vinesh had won a bronze at the 2019 World Championship in Nur Sultan to secure a quota for the Tokyo Olympics while Sindhu became the first Indian shuttler to become world champion last year. Manasi became a world champion after winning gold at the para world championship while Mary Kom is the only Indian boxer to win eight world medals. 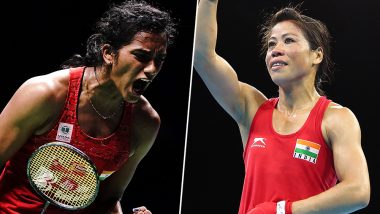 New Delhi, February 3: Star wrestler Vinesh Phogat, badminton queen PV Sindhu and boxing great MC Mary Kom will compete for the inaugural BBC Indian sportswoman of the year award after being nominated for the honour with two other athletes. Sprinter Dutee Chand and para-badminton player Manasi Joshi are the other nominees for the award, the winner of which will be announced on March 8. The winner will be decided on the basis of public voting, which will be open till February 18 on six BBC vernacular websites. Padma Awards 2020: Olympic Medalist Mary Kom to Be Awarded Padma Vibhushan, Shuttler PV Sindhu to Get Padma Bhushan.

Vinesh had won a bronze at the 2019 World Championship in Nur Sultan to secure a quota for the Tokyo Olympics while Sindhu became the first Indian shuttler to become world champion last year. Manasi became a world champion after winning gold at the para world championship while Mary Kom is the only Indian boxer to win eight world medals, including six gold. Dutee had won a 100m silver at the 2018 Jakarta Asian Games. Rupa Jha, the Head of BBC Indian languages, informed that the nominees were picked up by a panel of 40 eminent sports journalists.

"We had asked our panel members to pick their candidates. The five athletes who got the maximum number of votes, were eventually selected as the final nominees," Rupa said while addressing a press conference. "We will cover their journeys, the societal attitude towards them and their lives beyond sport. A research is being conducted on this, simultaneously," she added. Upcoming wrestler Sonam Malik, the two time world cadet champion, was asked to open the voting. Sonam had recently defeated Rio Olympic bronze medallist Sakshi Malik to secure her place in the senior Indian women team for the Asian Championship.

The 18-year-old, who idolises Vinesh Phogat, urged parents to support their girl child and not to marry them off at a young age as is the tradition in villages. Rupa said that in sports women's journey is comparatively tougher than their male counterparts, so they thought of honouring their achievements. "We feel that though, of late, the media has started taking interest in women athletes, still they are not promoted as male athletes. Since 2000, of the 13 Olympic medals, 5 are won by women but we feel the recognition they should have got, is not there. That was the thought behind starting this award," she said.

When a journalist asked why Manasi was among able-bodied athletes, Rupa said "they have kept in mind only the spirit of the sport while deciding and no discrimination was made". "I am very pleased to know that I am nominated not in para-athlete category but in the able bodied, normal category of sportswomen," Manasi was quoted as saying in a release. Indu Shekhar Sinha, BBC's Head of Business Development, Asia Pacific said the award will be an annual feature and they may introduce a category for emerging athletes in future.