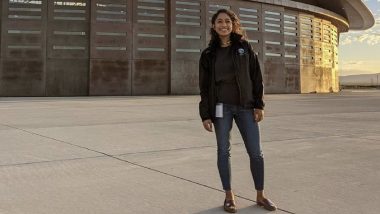 Bandla joined Branson and four others on board Virgin Galactic's SpaceShipTwo Unity to make a journey to the edge of space from New Mexico. They reached an altitude of about 88 kilometers over the New Mexico desert - enough to see the curvature of the Earth. The crew experienced a few minutes of weightlessness before making a gliding descent back to Earth.

"I am so incredibly honoured to be a part of the amazing crew of #Unity22, and to be a part of a company whose mission is to make space available to all," 34-year-old Bandla tweeted days before the flight.

"When I first heard that I was getting this opportunity, it was just... I was speechless. I think that that probably captured it very well. This is an incredible opportunity to get people from different backgrounds, different geographies and different communities into space," she said in a video posted on the Twitter handle of Virgin Galactic on July 6.

The primary objective for Unity 22 was to serve as a test flight for future commercial passenger flights by Virgin Galactic. Bandla, who was born in Guntur district in Andhra Pradesh and brought up in Houston, was astronaut No 004 and her flight role was Researcher Experience. The other crew members were two pilots and three other crewmates, including billionaire Branson, who turns 71 in a week.

She became the third Indian-origin woman to fly into space after Kalpana Chawla and Sunita Williams. Wing Commander Rakesh Sharma is the only Indian citizen to travel in space. The former Indian Air Force pilot flew aboard Soyuz T-11 on April 3, 1984, part of the Soviet Interkosmos programme.

Bandla moved to the US when she was 4-year-old and graduated with a Bachelor of Science degree from the School of Aeronautics and Astronautics, Purdue University in 2011. She finished her Master of Business Administration degree from George Washington University in 2015.

Bandla wanted to be an astronaut for the US National Aeronautics and Space Administration (NASA). However, her poor eyesight meant she could not meet the requirements to become a pilot or an astronaut.

When she was at Purdue University, a professor told her about an opportunity in the field of commercial space flights. Virgin Galactic - the business Branson started in 2004 - aims to fly private citizens to the edge of space. The trips are designed to permit passengers to experience three to four minutes of weightlessness and observe the curvature of Earth.

Branson has earlier stated that the entire flight will be about 90-minutes long and can be broadly divided into four portions: ascent up to launch position, release, flight to space and glide back to Earth for a runway landing at Spaceport America.

The four mission specialists evaluated different experiences that Virgin Galactic has promised its future customers, many of whom have already reserved trips to space with the company at USD 250,000 a seat.

Bandla tested the experience of performing experiments aboard Unity during different phases of the flight, including the weightless period. This was the 22nd flight of Unity, but only its fourth launch to space.

VSS Unity is the company's second SpaceShipTwo after the first, VSS Enterprise, broke apart during a 2014 test flight, killing one pilot and seriously injuring another.

Virgin Galactic has made numerous safety upgrades to prevent such an accident from happening again. If one has booked a trip with Virgin Galactic early, he may get your chance to fly in space as early as 2022.