In a report published on March 5, IATA (International Air Transport Association) said that air travel measured by Revenue Passenger Kilometres (RPKs) fell in January, from levels in December, and was 72 per cent lower than in the pre-crisis month of January 2019. 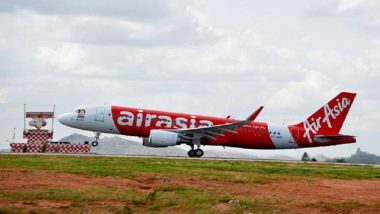 Singapore, March 15: Malaysian discount carrier AirAsia, which co-owns AirAsia India with Tata Sons, has launched a "no-frills" food delivery service in Singapore. This is aligned with their "super-app" strategy to diversify revenues following the devastation caused by the COVID-19 pandemic to the airline industry. Airlines around the world are struggling to stay afloat and are finding ways to generate some revenue in whatever form.

In a report published on March 5, IATA (International Air Transport Association) said that air travel measured by Revenue Passenger Kilometres (RPKs) fell in January, from levels in December, and was 72 per cent lower than in the pre-crisis month of January 2019. This setback for the airlines' passenger business was driven by tightening government travel restrictions across the world, following the emergence of COVID-19 variants.

Despite being the leading domestic carrier in Malaysia, AirAsia has been impacted by the government's ongoing lockdown (locally called "Movement Control Order") which restricts travel between states. Nikkei Asia last week reported that if the domestic air travel is not reopened by the end of next month, AirAsia will have to furlough more employees, after having already laid off 3,000 staff earlier. Zomato Delivery Executive Kamaraj Denies Assaulting Woman in Bengaluru, Says ‘Let the Truth Win’.

In the last months, AirAsia managed to ease their financial strain by securing about MYR747 million(USD182 million) of cash via new share issuance on the stock market together with a private placement to well-known Hong Kong businessman Stanley Choi.

In Singapore, AirAsia Food is up against incumbents, German company Foodpanda which started in Singapore in March 2012, UK-based Deliveroo (launched November 2015), and Singapore-based Grabfood which began in May 2018.

In a short span of a little over two years, Grabfood has grown to be the preferred food delivery service in Singapore. Together with Deliveroo, Grab reportedly corners 60 to 70 per cent of the market.

Like in India where Zomato and Swiggy dominate, the online food delivery service in Singapore is an established, stable business and is relatively tough to break into without deep pockets. However, the Indian market has scaled with market data firm Statista assessing revenue generated by the segment would be worth some USD 11.67 billion in 2021. Zomato and Swiggy, based on their latest fund-raising rounds, are reportedly worth USD5.4 billion and USD3.6 billion, respectively.

On the other hand, with a population of just 5.7 million, Singapore is a small market. Statista estimated that the size of the online food delivery market was USD464 million last year. At present, it is difficult to imagine AirAsia Food reaching the scale where the food delivery business would be a significant revenue contributor to the airline or that they will be able to attract private equity investments and eventually pull off a public listing.

AirAsia explained during a virtual launch event on March 2 that they would seek to give better value by reducing cost. Their competitive edge is a low commission rate of 15 per cent compared with the 25 to 35 per cent charged by the incumbents. A zero-commission business model is something they hope to adopt in the future. They already have 80 restaurant partners signed up and is in discussions to add another 300.

CEO and founder, Tony Fernandez said, "Just like (how) AirAsia doesn't have all the frills of Singapore Airlines, AirAsia Food, for instance, we don't have maps. We don't think you really need to know where your driver is because that costs us." He continued, "We think you will still be able to communicate with us to know where your food is and that's an unnecessary frill."

A benefit for customers is that they can earn reward points which can be used for AirAsia flights. AirAsia Food does not aim to be a dominant food delivery service in Singapore and targets small restaurants. They said that they have recruited about 500 delivery riders with plans to double this number by September. By comparison, Grab and Deliveroo each have about 6,000 delivery riders. AirAsia has set delivery fees in the range of SGD2.99 (USD2.23) to SGD20 depending on distance, up to 20km away, and says delivery riders should be able to earn an average of SGD700 per week.

AirAsia started their food delivery service last May in its home market of Malaysia, specifically in the Klang Valley region in the capital city Kuala Lumpur. They are a small player and as of December last year were making about 1,000 deliveries a day compared with the larger incumbents who are fulfilling about 55,000 deliveries. They hope to achieve 10,000 deliveries soon.

There are plans to expand to other Malaysian cities starting with Penang and Johor Bahru. International expansion plans include Thailand, Indonesia, and the Philippines in the second half of 2021. Marriage Food Delivery At Doorstep! Innovative Wedding Trend Goes Viral; From Zoom Calls to Bride-Groom Masks, How Big Fat Indian Weddings Adapt to Social Distancing as New Normal.

With well-established incumbents, it can be an expensive exercise for AirAsia to break into the markets they are targeting and unseat existing players. While still bleeding cash from the airline business, they will have to have to find the financial resources to run advertisements and promotions, offer discounts (or free service), spend money to scale operations, acquire customers as well as restaurant partners.

As they scale, though they have a recognised brand in the region, they will hope that customers are able to tolerate longer delivery times due to the limited number of riders they currently have. App users will also be unable to track the status of their deliveries since that feature is not included in the app.

Food delivery is a notoriously price-sensitive business with little customer loyalty since there is no switching cost and a cheaper meal maybe just a few taps away on the phone.

AirAsia will have to be even more innovative at food delivery than when they started in the airline industry if they hope to successfully repeat the disruption they caused.