As India looked for a venue to conduct the Indian Premier League owing to the COVID-19 situation, the strong relations between the two countries were once again highlighted with UAE playing host to the popular cricket season with eight star-studded teams playing 60 matches for nearly two months in the country. 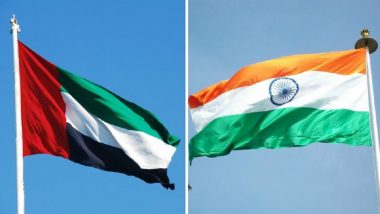 Dubai, December 26: The traditionally harmonious relationship between the UAE and India was further cemented in the year 2020 with their top leadership holding regular parleys to enhance cooperation on bilateral, regional and multilateral fronts in the post-COVID era, including the welfare of the vast Indian community in the Gulf kingdom.

The two sides also discussed prospects for economic cooperation between India and the UAE in the post-COVID-19 era and the situation in the neighbourhood of both countries. India's concern for the welfare of 3.3 million Indians living in the UAE, especially during the COVID-19 pandemic, was one of the main points during the deliberations.

Jaishankar thanked Sheikh Mohammed for taking care of the Indian community, underlining that India had been a reliable partner to the UAE in all respects during this difficult period. He also assured the diaspora of the Indian government's responsiveness on issues pertaining to post-COVID normalcy.

Naravane's visit to the UAE was historic as it was the first-ever by the head of the Indian Army to the country. He met Commander of the UAE's Land Forces and Staff Major General Saleh Mohammed Saleh Al Ameri and discussed key issues of mutual interest and defence cooperation. The visit is expected to further open up new avenues for cooperation in the defence and security sphere.

Indians constitute roughly 30 per cent of the country's population. Earlier in March, the Crown Prince assured Prime Minister Narendra Modi about the health and safety of the Indian community during the pandemic as the two leaders exchanged information and views on the COVID-19 pandemic, the situation in their respective countries, as well as the steps being taken by their governments to deal with the situation.

Jaishankar, who has taken a special interest in the India-UAE bilateral relationship, said: "It is a relationship where the highest leadership of both countries have invested goodwill and energy. As a result, you can see the transformation during the last five years."

The ties between India and the UAE are on an upswing in the last few years and the leaders of the two countries have been holding regular parleys this year to strengthen them further in the post-COVID era, especially on the economic front.

With robust flow of bilateral investments and an annual bilateral trade of about USD 60 billion, the UAE is India's third-largest trade partner. The influential Gulf nation is also a major exporter of crude oil to India. India has also invited further investments from the UAE in key sectors of the Indian economy such as infrastructure including logistics, food parks, highways, ports, airports, renewable energy and defence.

In September, the Consulate General of India, Dubai, and Tea Board India co-organised a virtual B2B Meet to promote Indian tea in the UAE. As the pandemic wrecked havoc across the world, it provided an opportunity for the two countries to come closer and extend a helping hand to each other to sail through the crisis.

In May, the UAE sent seven metric tonnes of medical supplies to India to bolster its fight against the COVID-19 pandemic. "UAE assistance to India comes in recognition of the profound and brotherly ties our two countries have shared throughout the years," the UAE's Ambassador to India Ahmed Abdul Rahman AlBanna had said.

India repatriated its 84,497 citizens from the UAE under the Vande Bharat Mission, the country's biggest ever repatriation exercise to bring back its citizens stranded abroad amidst the international travel lockdown over the pandemic.

The UAE is also one of the countries with which India has formed an air bubble arrangement to operate flights amid the pandemic. India also welcomed the "full normalisation" of ties between the UAE and Israel, its key strategic allies, under a historic peace deal brokered by the US, asserting that it has consistently supported peace, stability and development in West Asia.

From an Indian perspective, the normalisation of the UAE-Israel ties has started bearing fruit. On December 14, it was announced that the International Federation of the Indo-Israel Chambers of Commerce (IFIICC) has been launched in the UAE to broaden relationship between the Indian diaspora and Israel.

At the event, it was agreed that scientific research, IT, AgriTech and food security, health care and sustainability are areas of natural synergy among India, Israel and the UAE.

As India looked for a venue to conduct the Indian Premier League owing to the COVID-19 situation, the strong relations between the two countries were once again highlighted with UAE playing host to the popular cricket season with eight star-studded teams playing 60 matches for nearly two months in the country.