Get latest articles and stories on World at LatestLY. Iran's Navy has thwarted a pirate attack on an Iranian cargo ship in the Gulf of Aden, Iranian Press TV reported on Saturday. 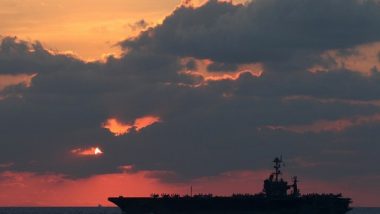 Tehran [Iran], May 14 (ANI/Xinhua): Iran's Navy has thwarted a pirate attack on an Iranian cargo ship in the Gulf of Aden, Iranian Press TV reported on Saturday.

Unidentified pirates attacked the ship on Friday, but facing the fire from the Iranian Navy's 80th fleet they fled, the Navy said in a statement. The Iranian vessel is now sailing to its designated destination, it added.

Over the past years, Iran's Navy has managed to foil several attacks on both Iranian and foreign vessels in international waters.

According to Press TV, the Iranian Navy's 80th naval fleet, including the Alborz destroyer and Bushehr naval escort ship, are present in the Indian Ocean and the Gulf of Aden for protecting cargo ships and tankers. (ANI/Xinhua)