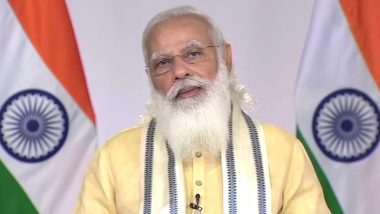 "Japan's Prime Minister and I believe that during COVID-19 pandemic, India and Japan's friendship and partnership becomes more relevant for global stability and prosperity. Need of the hour is that our relations should become stronger," said Prime Minister Modi while inaugurating Zen Garden and Kaizen Academy in Ahmedabad.

"India and Japan have been devoted to external progress, we have also given importance to internal peace and progress," he said. Speaking about Zen Garden and Kaizen Academy in Ahmedabad, he noted that what is 'Zen' in Japan is 'Meditation' in India. "This is the meditation that Buddha gave to the world. And as far as the concept of 'Kaizen' is concerned, it symbolises the strength of our intentions in the present." Mann Ki Baat 78th Edition: PM Narendra Modi Urges People to Overcome Vaccine Hesitancy.

He said that the Japanese Zen Garden is a beautiful expression of this quest for peace, and simplicity. The Prime Minister further highlighted centuries-old ties between Japan and India.

"We also have a strong belief in centuries-old cultural ties, and a common vision for the future! On this basis, we have been continuously strengthening our special strategic and global partnership for the past several years. For this, we have also made a special arrangement of Japan-Plus in PMO," he said.

Recently, India and Japan expressed their continued support for Quad, the four-nation grouping of the United States, India, Australia and Japan. Japan and India view each other as partners that have responsibility for, and are capable of, responding to global and regional challenges in keeping with their global partnership.