French voters on Sunday inflicted a major setback on the far-right National Rally party in the first round of the country's regional elections, dashing party president Marine Le Pen's hopes of turning the vote into a springboard for next year's presidential race. 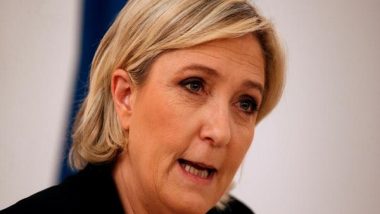 Paris [France], June 21 (ANI): French voters on Sunday inflicted a major setback on the far-right National Rally party in the first round of the country's regional elections, dashing party president Marine Le Pen's hopes of turning the vote into a springboard for next year's presidential race.

According to The New York Times (NYT), Les Republicains, a centre-right party, has appeared to cement its hold on the country, positioning itself as a strong challenger to President Emmanuel Macron, whose centrist party trailed in all regions.

Les Republicains had pulled ahead in six of France's 13 mainland regions, capturing about 30 percent of the vote nationwide, according to estimates by polling agencies. In contrast, National Rally came first in only one region and received 20 percent of the overall vote.

That was a sharp decline from the first-round results of the previous regional elections in 2015, when National Rally finished first in six regions.

In the northern region of Hauts-de-France, the candidate of Les Republicains, Xavier Bertrand, pulled ahead on Sunday with 43 per cent of the vote. His main challenger, Sebastien Chenu of the National Rally, came second with only 24 per cent of the vote -- about 16 points down from 2015.

Roughly 34 per cent of voters cast ballots, meaning that about 30 million people stayed away. In the last regional election, the turnout was 49 per cent, while two decades ago it was almost 70 per cent, reported NYT.

Several leaders of Les Republicains have also been counting on the regional elections to build momentum for a potential presidential bid.

This year's regional polls were regarded as a referendum for the 2022 presidential race and Le Pen had framed the contest as a dress rehearsal for next year's elections, in which she will most likely be the main challenger to Macron.

Meanwhile, Sunday's vote coincided with the first day of the lifting of an eight-month coronavirus curfew, which fuelled a deep sense of fatigue and frustration in the population.

The political campaign -- which was delayed by a year because of the pandemic -- has been marked by acts of violence against political leaders, letters from military personnel warning of an impending civil war and inflammatory speeches fueling France's growing culture wars, reported NYT.

The second round of voting on next Sunday will determine the final results, and changes in turnout between the two rounds could potentially shift the momentum in favor of one party or the other.

Pascal Perrineau, a political science professor at Sciences Po university, said Sunday's vote "shows that the old world is not dead at all," adding that it had placed the French center-right as France's leading political force.

In 2015, National Rally pulled ahead in six regions in the first round but was eventually defeated in all six in the runoff, as other competing parties formed alliances to keep the far right from power.

Nicolas Lebourg, a political scientist, said that Sunday's vote was a "significant setback" for Le Pen's party and a blow to her strategy of normalisation.

Le Pen said that the real cause of her party's poor results was the lack of voter turnout. "If you want things to change, you have to vote. Anything is possible, if you decide to do it," she said in a speech.

Macron recently set off on a six-week political tour of France in an effort to reconnect with French people as they emerge from the COVID-19 crisis. It appeared to be a first step in his expected 2022 re-election campaign. (ANI)