The lengthy message repeatedly referenced an Islamic government that the Taliban seek to establish in Afghanistan, without elaborating on how it would be different. 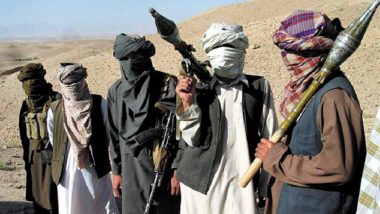 Islamabad, July 28: Washington's peace envoy was heading back to the region in efforts to jump-start negotiations between the Afghan government and the Taliban as the insurgents offered a conciliatory message on Tuesday ahead of major Muslim holiday.

Khalilzad was expected in Islamabad and also in the Afghan capital of Kabul, as well as in Qatar, where the Taliban maintain a political office. Also Read | COVID-19 Tally in Delhi Rises to 1,32,275, Death Toll Mounts to 3,881: Live News Breaking And Coronavirus Updates on July 28, 2020.

In his message ahead of the Eid al-Adha holiday, Taliban leader Hibatullah Akhunzada said the insurgents do not seek to monopolize power in a future political makeup of Afghanistan. The lengthy message repeatedly referenced an Islamic government that the Taliban seek to establish in Afghanistan, without elaborating on how it would be different. Akhunzada also said the Taliban support education for all and were abiding by the peace deal signed with the United States in February. Also Read | ECB Urges Banks Not to Pay Dividends or Offer Bonuses Until January 1, 2021 to Survive Economic Crisis Amid COVID-19 Pandemic.

The U.S.-Taliban deal was touted as the best hope for peace in Afghanistan after decades of war. While the U.S. and NATO have already begun reducing their troop strength, the second phase of the deal — which calls for talks between the Taliban and the Kabul political leadership — has been delayed.

Much of the delays have been as a result of Kabul's reluctance to free several hundred of the Taliban prisoners identified for release as part of the agreement. Kabul claims those Taliban prisoners are hardened criminals, guilty of major crimes. Under the deal, Kabul was to release 5,000 Taliban and the insurgents had promised to free 1,000 government and military personnel. So far, Kabul has freed bout 4,000 and the Taliban nearly 800.

Last week, the Taliban announced they were ready for talks with Afghanistan's political leadership after the Eid al-Adha holiday, providing the last of the Taliban prisoners had been freed by then. The announcement followed one of the most significant shakeups in the Taliban in years.

The Taliban have stuck to their promise not to attack US and NATO troops, but have carried out scores of attacks on Afghan military targets. The United States would like to see those attacks reduced or stopped. The Taliban have also said they were ready to negotiate a cease-fire in the talks with Kabul — whenever they begin — and accused the Afghan government of attacking the Taliban in their homes.

“The Islamic Emirate has fulfilled its obligations regarding signing an agreement with the United States ... and efforts towards launching intra-Afghan negotiations," said Akhunzada. “It is now up to the other parties to determine how they utilize this opportunity.” “”We are not looking for monopoly over power," he also said. "We do not hold personal vendetta against anyone.”