2021 Honda Amaze Facelift Production Begins, To Be Launched in India on August 18, 2021

Honda Cars India is all geared up to launch the 2021 Amaze facelift in India on August 18, 2021. The pre-launch bookings for the car are already open with a token amount of Rs 21,000 at authorised Honda dealerships across India. 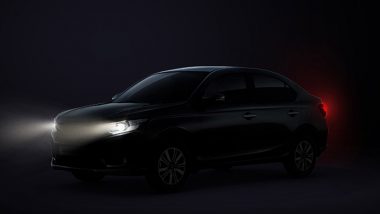 Honda Cars India is all geared up to launch the 2021 Amaze facelift in India on August 18, 2021. Ahead of its launch, the company has started teasing the new Amaze facelift on its official social media platforms. The Japanese carmaker has commenced the production of the new model at its manufacturing facility in Tapukara, Rajasthan. The pre-launch bookings for the car are already open with a token amount of Rs 21,000 at authorised Honda dealerships across India. Interested customers can book the car by paying Rs 5,000 via the Honda Car India website. 2021 Honda Amaze Bookings Now Open; India Launch Scheduled for August 18, 2021.

Talking about features, the 2021 Amaze facelift will get a bunch of exterior updates including a tweaked grille, new LED projector headlamps with LED DRLs, new LED taillamps, a new set of alloy wheels and more.

Take on life's exciting journeys and reach new milestones when you drive with pride in the New #ShaandaarAmaze! Book now: https://t.co/Lu5Zx5jQht pic.twitter.com/sIW9e5DD37

Mechanically, the upcoming Amaze will retain 1.2-litre i-VTEC petrol and 1.5-litre i-DTEC diesel engine options from the outgoing model. The petrol engine will produce a maximum power of 90PS and 110Nm of peak torque whereas the diesel engine will generate 100PS of max power and 160Nm of peak torque. Both engines will be paired with 5-speed MT or CVT automatic gearbox.

On the inside, the upcoming Amaze car is expected to come loaded with a new infotainment system and upholstery among others. Coming to the pricing, the 2021 Honda Amaze facelift is likely to cost slightly higher than its previous version which is priced between Rs 6.22 lakh to Rs 9.99 lakh (ex-showroom, Delhi). When launched, the new Amaze facelift will compete with Maruti Suzuki Dzire, Ford Aspire, Tata Tigor and Hyundai Aura.

(The above story first appeared on LatestLY on Aug 05, 2021 03:06 PM IST. For more news and updates on politics, world, sports, entertainment and lifestyle, log on to our website latestly.com).