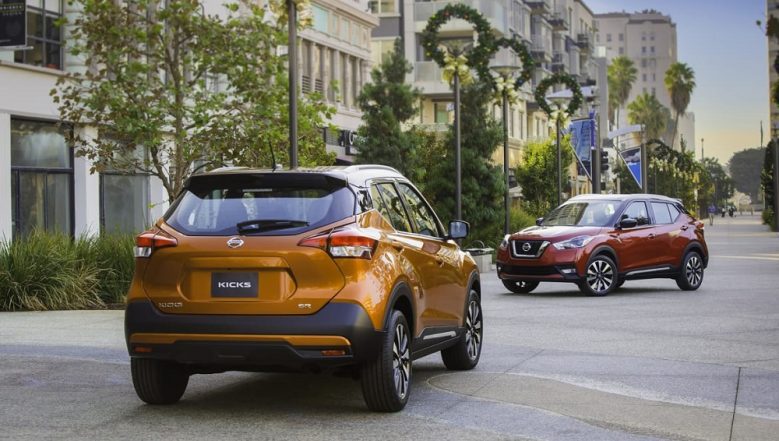 Nissan Kicks is one of the most awaited cars from the stable of the Japanese car maker which is speculated to launch in India this year. The compact SUV was unveiled initially in the form of a concept with an intent to go on sale in the Latin American and Brazilian markets. The car-maker has officially announced the launch timeframe of the SUV. In the international markets, the Kicks compact SUV is based on the V platform; however, the India-spec model is expected to sport a M0 platform likewise Renault Duster and Captur. All-New Mahindra TUV300 Plus Launched in India, Prices Start From Rs. 9.47 Lakh; To Challenge Maruti Ertiga & Renault Lodgy.

Inside the cabin, the compact SUV will continue to flaunt its premium-ness on the inside as well. It will come with a 7-inch infotainment system, flat-bottom steering with audio controls, automatic climate control and reverse and parking cameras and much more. It is also believed that the SUV is expected to share some of its features and components with Renault Captur.

Under the hood, the compact SUV is expected to borrow engine options from Renault models. The diesel unit could be a 1.5-litre K9K engine while the petrol motor is likely to get a 1.5-litre petrol engine. The former is expected to be offered in 2 states of tunes - 84bhp/210Nm & 108bhp/240Nm while the latter will develop 104.5bhp of max power & 142Nm of peak torque. However, the petrol model could make its way to the market next year. Moreover, the transmission duties are likely to be carried out by a 5-speed manual, a 6-speed manual and an optional Xtronic CVT. 2018 Maruti Swift in Huge Demand! More than 1 Lakh Units sold in just 145 Days Since Launch.

As far as the prices are concerned, the upcoming Nissan Kicks SUV will be a premium offering which will be slotted above Nissan Terrano in Nissan's product offering for India. Coming to the competition front, the SUV will take on the rivals such as Hyundai Creta, Renault Captur and even Mahindra XUV500.